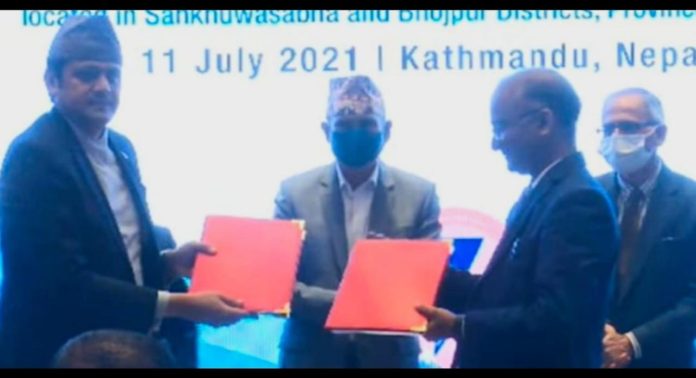 A Memorandum of Understanding (MoU) has been signed for the development of 679 MW Lower Arun HEP between India and Nepal today.
A press release issued here today said that mini bluechip company of India, SJVNL CMD Nand Lal & CEO Investment Board of Nepal (IBN) Sushil Bhatta signed the MOU at Kathmandu today.
The MoU was signed in the benign presence of   Deputy Prime Minister of Nepal, Bishnu Prasad Paudel  and Ambassador of India to Nepal, Vinay Mohan Kwatra .
On this Occasion CEO SAPDC , Arun Dhiman and CFO SAPDC, Jitender Yadav were also present along with other senior officials from Government of Nepal and SJVN. Sharma apprised that,SJVN Limited has bagged 679 MW Lower Arun HEP through  International Competitive Bidding (ICB), which involved big players . The Lower Arun Hydro Electric Project is located in Sankhuwasabha and Bhojpur Districts of Nepal.
The project would not have any reservoir or dam and will be a tail race development of 900 MW Arun3 HEP. The project would have four francis type turbines. On completion the Project will generate 2970 million units of electricity per annum. The project is scheduled to be completed in four years after commencement of construction activities. The project has been allocated to SJVN for 25 years on BOOT basis.

Sharma expressed deepest gratitude to the Government of Nepal for keeping their faith in the abilities and capabilities of SJVN by selecting it as developer for Lower Arun HEP. He also thanked Ministry of Power,Government of India for supporting SJVN in all its endeavours in India & Abroad.
He further informed that SJVN started its journey in Nepal in the year 2008 by signing of MoU for implementation of 900 MW Arun-3 Project. The Project construction activities commenced with laying of foundation stone jointly by Prime Minister of India Narendra Modi and Prime Minister of Nepal, K.P. Sharma Oli in 2018 with the active help and support of IBN and Government of Nepal.

Sharma further told that, 900 MW Arun 3 Hydro Electric Project has achieved significant progress in the last three years despite the global pandemic of COVID-19, as construction activities of the Project are on full swing. In order to mitigate any delays due to pandemic SJVN has already implemented acceleration plan and is committed to commission this project ahead of schedule.
He also emphasized that such progress could not have been achieved without the continuous support of IBN and Government of Nepal. The requisite approvals were granted in a shortest possible time despite the challenges faced due pandemic.
Sharma stressed that the Hydro Power has to be developed with Integrated River Basin Development approach for economic viability and to give boost to infrastructural development.
This approach will result in optimization of resources and faster project completion at lower cost. He also requested Government of Nepal for providing further opportunity to SJVN in partnering with the Government for harnessing Hydro Power in Nepal.