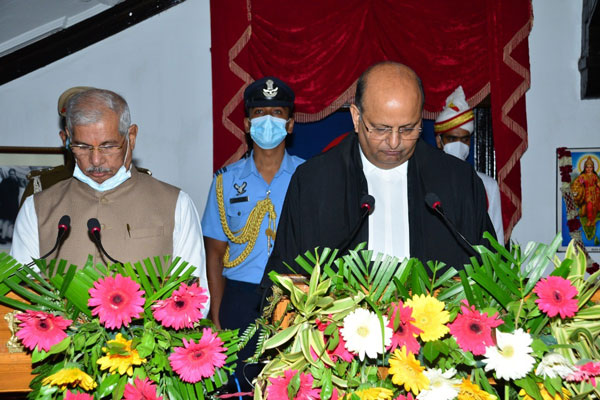 Shimla, Oct 14
Justice Mohammad Rafiq was sworn in as the Chief Justice of Himachal Pradesh High Court in Shimla on Thursday.  He was administered the oath of office by Governor Rajendra Vishwanath Arlekar in a ceremony held at Raj Bhawan.
The ceremony took place at the Darbar Hall of Raj Bhawan, where Chief Secretary Ram Subhag Singh conducted the proceedings of oath ceremony and read out the notification issued by the Government of India, Ministry of Law and Justice regarding transfer of Justice Mohammad Rafiq as Chief Justice of the High Court of Himachal Pradesh. Chief Minister Jai Ram Thakur and his wife Dr. Sadhana Thakur were also present on the occasion.
Justice Mohammad Rafiq was born on 25th May, 1960 at Sujangarh in Churu district of Rajasthan. He completed B.Com in 1980, LL.B in 1984 and M.Com in 1986 from University of Rajasthan. He later on joined the Bar and practiced as Advocate after enrolment with the Bar Council of Rajasthan on 8th July, 1984.
He practiced exclusively in Rajasthan High Court at Jaipur in almost all branches of law and especially conducted constitutional matters, service matters, land acquisition cases, land revenue cases, preventive detention cases, customs & excise matters, railway claims cases, tax matters, company matters and criminal matters before the High Court.
He worked as Assistant Government Advocate for the State of Rajasthan from 15th July, 1986 to 21st December, 1987 and Deputy Government Advocate from 22nd December, 1987 to 29th June, 1990.
He appeared before the High Court as panel advocate for various Departments of the State Government for five years i.e. from 1993 to 1998. He also represented the Union of India as Standing Counsel from 1992 to 2001 before the High Court. He also represented the Indian Railways, Rajasthan State Pollution Control Board, Rajasthan Board of Muslim Wakfs, Jaipur Development Authority, Rajasthan Housing Board and Jaipur Municipal Corporation before the Rajasthan High Court.
He was appointed as Additional Advocate General for the State of Rajasthan on 7th January, 1999 and worked as such till his elevation to the Bench. He was appointed as Judge of the Rajasthan High Court on 15th May, 2006. He also worked as Acting Chief Justice of Rajasthan High Court twice; from 7th April, 2019 to 4th May, 2019 and from 23rd September, 2019 to 5th October, 2019.
He was also the Executive Chairman of the Rajasthan State Legal Services Authority and the Administrative Judge of the Rajasthan High Court prior to elevation as the Chief Justice.
He  was the Chief Justice of the High Court of Meghalaya from 13th November, 2019 to 26th April, 2020. Justice Mohammad Rafiq was administered the oath of office of the Chief Justice of Orissa High Court on 27th April, 2020, on being transferred from the Meghalaya High Court.  He  was administered the oath of office of the Chief Justice of High Court of Madhya Pradesh on 3rd January, 2021, on being transferred from the Orissa High Court.
Urban Development Minister Suresh Bhardwaj, Judges of Himachal Pradesh High Court, Justice Vijay Kumar Shukla from Madhya Pradesh High Court, GoC-in-C, ARTREC Lt. General Raj Shukla, Advocate General Ashok Sharma, Chairman of various commissions, DGP Sanjay Kundu, Mayor Satya Kaundal, Chairmen and Vice-chairmen of various boards and corporations, Vice Chancellors, senior officers of the state government and other prominent people were also present on the occasion.
Speaking to media person after oath taking ceremony Justice Mohammad Rafiq said that he would ensure that all criminals cases pending for more than five years in the high court and other subordinate courts of state would be heard on top priority.
“Moreover after resuming the duty of Chief Justice of Himachal would convene a meeting of all high court judges, judicial officers of high court and other judges of subordinate courts to make special efforts to end the pendency if there would be found in state, I am not still  aware of the state of pendency” said Justice Mohammad Rafiq.
Wife of Justice Mohammad Rafiq Seema Rafiq was also present in the oath taking ceremony.

Unprecedented rain wreak havoc in many villages of Chamba