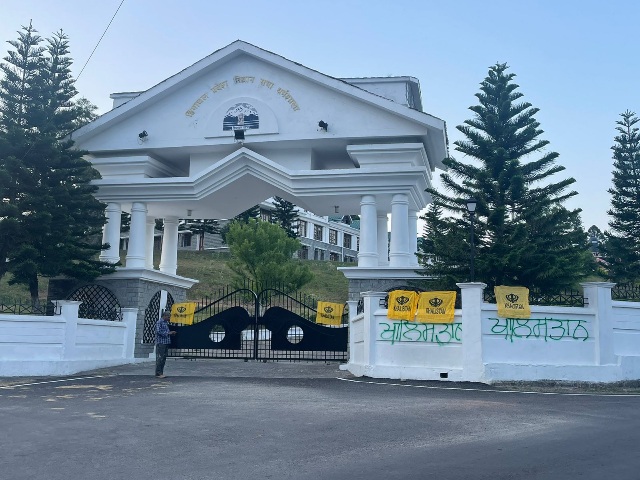 The present BJP government in HP was again given a big shock when anti-national elements pasted or tagged Khalistani flags and inscribed the name Khalistan in Gurmukhi on the outer side of the boundary walls of the Tapovan Vidhan Sabha complex near Dharamsala. The govt’s security machinery with in state and coordination with adjoining states and the Central agencies has collapsed as this incident has taken place. More so, there seemed to be be no alert in the state after some Khalistani calls had been threatening the BJP leaders of the state through media as well as others.
After the incidence, the state security administration has made ceremonious statement to have beefed up the security in the state.
The state government has failed to ensure the security of important installation like Vidhan Sabha where anti-national elements exhibited their mischievous designs breaching all security systems.
The state police is clueless about similar recent incidents of balloons with pro-Pak slogans. These have raised questions about failures of security network. The other administrative lapses include leakages of recruitment test papers including that in police department.
A complaint by Ram Chand alias Ajay Kumar (s/o  Subhash Chand resident of village Kaned, Tehsil Dharamshala, District Kangra) has indicated that anti-national activities are going in high-security police fortess at Tapovan, the venue of Winter Session of Vidhan Sabha near Dharmshala.
Meanwhile, a press communique issued by the state police after the incident confirmed that Khalistani flags were tagged and and wall writing done in Gurumukhi script on the outer boundary wall and gate of Tapovan Vidhan Sabha complex. On the basis of this complaint FIR was registered under section 153-A, 153-B IPC and Sec 3 of HP Open Places (Prevention of Disfigurement) Act, 1985 at  Police Station Dharmshala.
Later during the day, the Director General of Police constituted a Special Investigation Team (SIT) headed by Santosh Patial, DIG-Intelligence & Security, Dharamshala with Puneet Raghu, Addl. SP Kangra, Chander Paul SDPO Jawalaji,  Sushant Sharma  Dy.SP CID Mandi, Sidharath Sharma SDPO, Jawali , SHO Dharamshala and Incharge Police Post, Yol as members for investigating the case.
The SIT has also been directed to contact the State and Central Intelligence Agencies to identify the Inter-State and International linkages, if any, in this case. Terms of Reference (TOR) of the SIT included to take up the investigation of the case immediately in the professional and impartial manner and ensure transparency in the investigation of the case. The SIT has been asked to investigate the above case thoroughly & expeditiously to meet the ends of justice and would update the Police Headquarters the progress of investigation periodically.
Whereafter by the evening even, opposition Congress has questioned the intelligence network of the state government.

More than 1000 employees did not receive Postal ballot