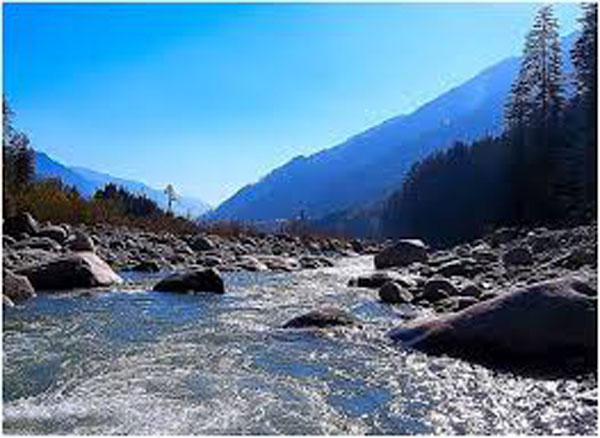 SHIMLA, 11 June, 2020
Low inflow in Himalayan rivers during the current year has adversely impacted hydro power generation in the Himachal Pradesh based hydel projects. Generation data from various power projects reveals that the downside is as high as 25 percent in some of the projects.
Electricity generation at India’s largest 1500 MW Nathpa Jhakri hydro power station located on Satluj river recorded a down slide of 25 percent during the months of April and May 2020 as per information gathered by HimachalScape.  Against the generation of 1316 million units achieved during April-May last year, the power plant generated only 1052 million units during the same period this year. Similarly the down- stream 412 MW Rampur hydro power plant of the company generated only 302 million units during the period against 374 million units achieved last year.
The operating company SJVN Limited informed that average inflow in the river Satluj during the month of April was 123 cu.sec against 174 cu.sec recorded last year. In the month of May inflow in the river was 259 cu.sec against 274 cu.sec received last year. The low inflow continued during the month of June as well impacting power generation. On 5th of June the inflow received was only 321 cu.sec against 548 cu.sec received last year.
The low inflow in river Satluj is the result of climate changes resulting in lesser snow melting in catchment areas noticed this year. The two power plants of the company generate 70 percent of electricity during the period 15th April to 15th September when the inflow in river remains at its peak while during the period 16th September to 30th March the inflow reduces due to less snow melting.
The 800 MW Koldam Hydro power station being operated by public sector NTPC Limited downstream on river Satluj also recorded lower electricity generation during the period.
The project’s spokesman informed that during the period up-to 7th June the power plant recorded a generation of 491 million units against 626 million units recorded during the same period of last year. The spokesman revealed that the low generation was the result of lesser average inflow received in the Dam at 343 cu.sec against 556 cu.sec last year. As a result of the lower inflow the reservoir level too has reduced by 5 meters.
Similar low inflows have been recorded in other rivers of Himachal Pradesh adversely impacting the power generation.
Himachal Pradesh has a power potential of about 27,000 MW out of which only 10,000 MW is being generated in public and private sector. The major power producers in public sector are SJVN Limited (1912 MW), NTPC Limited (800 MW), NHPC Limited (1771 MW) and BBMB (2711 MW), while the state electricity board accounts for only 7 percent of the electricity generation at only 489 MW.
Of the major rivers on which power plants are located Satluj river has the largest potential of over 7000 MW. All the rivers are snow fed and any climate change directly impacts power generation in the state.