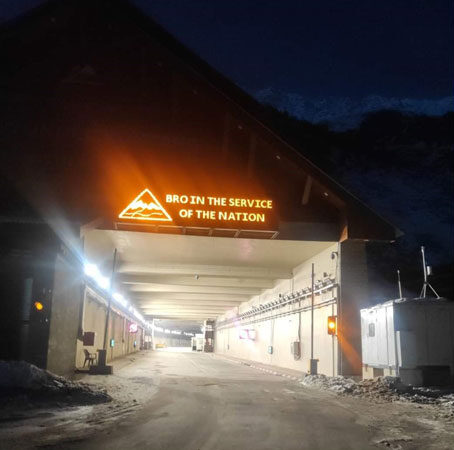 Shimla, Dec 17
District Administration Kullu and Lahaul-Spiti was informed by the National Highway Authority of India to restrict the movement of traffic on Atal Rohtang Tunnel for maintenance and cleaning of the tunnel twice in a week.
Assistant Engineer of NHAI Shivam Mishra  informed the Deputy Commissioner and Superintendent of Police Kullu and Lahaul-Spiti on restriction on movement of vehicles through Atal Tunnel.
” Maintenance of Atal tunnel is of paramount importance and is being alone on a strict regular basis.  Due to increase in the movement of vehicles through Atal tunnel present maintenance schedule time is insufficient to carry out proper cleaning in Tunnel . ” Mishra said in the intimation letter to respective district Administration.
He said that Dec 20 onward,  every Monday and Thursday the traffic movement should remain closed from 0700 hrs to 930 hrs by Police Authority. ‘ No Vehicle Movement in the Atal Tunnel during maintenance schedule except in emergency situations would be permitted  ‘ warned NHAI Officer.
Currently thick sheet of black ice is formed on the entry points to the tunnel due to dipping temperature. It is making it impossible to move on with extremely slippery roads on both North and South portal of the tunnel.
After Commissioning of this tunnel early this year vehicular traffic become possible to run round the year in all weather which have to close down for rest of winter season in month of November onwards. Manali-Leh high is through upto Keylong or Darcha in Lahaul Spiti district.

Defacing walls & landscape to be charged from candidates: EC

Total mass of plastic on planet twice that of all living...