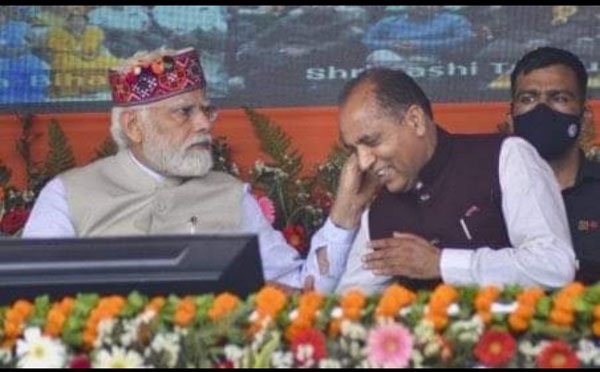 After a pat on the back by Prime Minister Narinder Modi in the recent Shimla rally, both the rhythm and tone of CM Jairam Thakur seem to have changed. A revamped body language and political willpower has been witnessed in the first time CM during his Kangra visit, claim political experts.
For the first time, the Chief Minister publicly indicated that he was now in the mood to form his team of political soldiers. His appearance stated a raised head in front of the upcoming assembly elections for the first time. He publicly announced that he would give everything to Nurpur, provided the people of Nurpur promised that they would send Rakesh Pathania as MLA to Shimla again.
Even though the future of election tickets is unknown, how many targets has Jairam hit with this one arrow earns some marks.
What would have been the real purpose of flagging Pathania’s ticket? It is worth noting that Ranveer Singh Nikka has also staked a claim on a BJP ticket in Nurpur. By holding a big rally, Nikka also conveyed that he would become a more significant threat to Pathania. So is it to be believed that the CM has shown the door to Ranvir Nikka?
No, it does not seem like it at all. This arrow perhaps was not aimed at Ranvir Nikka but at Prem Kumar Dhumal and Shanta Kumar. Shanta Kumar was the first to make Nikka grow up in politics to date. Then Nikka took refuge with Dhumal and Anurag Thakur. At the same time, Rakesh Pathania taking the Shanta-Dhumal route, has become a staunch devotee of Jairam. In such a situation, it seems that Jai Ram Thakur has poured political acid into the roots of the saplings planted by the Shanta and Dhumal camps for the first time. Evident also, as Jairam’s intent of team formation is similar to Shanta-Dhumal aspiration, who has their teams in their times.
Following in the footsteps of Dhumal, for the first time, Jairam gave a police district to his devotee Rakesh Pathania. This was in a similar fashion when, years ago, Dhumal had given Baddi a separate police district. Here too, a mirror was secretly shown to Shanta Kumar’s announcement in which the former CM was heard opposing the demand for separate districts in Kangra. Today, a police district has been given, maybe tommorow, Jairam may also give an administrative district to Nurpur! The stove has just been shaken.
Moreover, also to be noticed is that in the past four and a half years, on visits to Kangra, first Jairam used to touch base with Palampur, and then the district’s future was decided. However, this time, neither before the announcement of a separate police district nor later were the doors of big leaders knocked.
With just an eye, the focus remained on the announcements to build an image for oneself through political willpower and by strengthening the team of disciples.
The best part is that the biggest change in Jairam has also been seen in the state’s largest district, Kangra.
After all, the hand of Narendra Modi is of paramount importance in the politics of the BJP. Even now, if Jairam does not grow larger than Himachal BJP, when will he…?