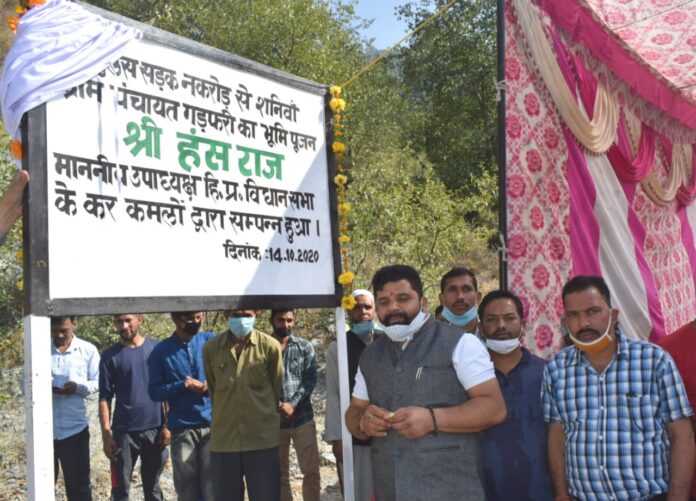 Assembly Deputy Speaker Hansraj today of Churah subdivisionUnder the various gram panchayats visited and laid the foundation stones and inaugurations of many development schemes and facilities.

The Legislative Assembly Deputy Speaker laid the foundation stone of the contact road to be constructed from Nakarod to Shanewan village of Gram Panchayat Ghadfari.

Addressing the people during the programs organized on these occasions, the Deputy Speaker said that the Churah Valley had been a victim of political exploitation during the past decades. The departmental offices and institutes approved for this area were shifted out of the Legislative Assembly. Due to this, the residents of the valley did not get the benefit of developmental activities and basic facilities.

Chief Minister Jairam Thakur, Hansraj said that not only these institutions and offices were reopened by the state government in Churah Assembly constituency but also new institutes and offices have been opened.The Assembly Deputy Speaker said that the land has been selected for the building of Primary Health Center, Nakarod, now the foundation stone will be laid soon so that construction work of Primary Health Center can begin.

He also performed bhoomi pujan for the construction of Karatot-Chaloi connectivity road from Saramadhu in the newly formed Bihali Panchayat. He also provided Fixed Deposit Receipts (FDRs) to 60 beneficiaries of Jungera and Khajua panchayats under Beti Hai Anmol Yojana, saying that the overall upliftment and welfare of girls are among the biggest priorities for the state government.

The Legislative Assembly Deputy Speaker said that the issue of fodder to the cattle ranchers due to the drought said that the matter will be put up before Chief Minister Jairam Thakur to help the cattlemen overcome the problem of fodder for their animals during the winter season.

Former CM appeals to supporters not to come to greet him...