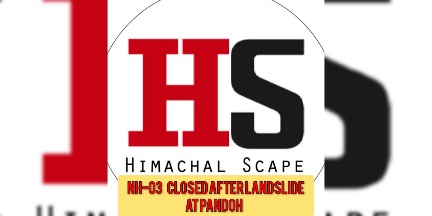 Shimla, Jan 27
A massive landslides hit Chandigarh-Manali National Highway No 3 at Seven-Mile near
Pandoh this evening in Mandi district of Himachal disrupting veicular traffic. Two earth movers were deployed by the National Highway Authority to clear the road, confirmed a senior police officer.
Superintendent of Police of Mandi  District Shalini Agnihotri said that a landslide occurred on NH-3 at 7-Mile at Pandoh between Mandi and Kullu. The landslide blocked all kind of vehicular traffic on the highway.  The National Highway Authority have deployed to JCB machine on the spot to clear the road and works is in progress, she added.
367 roads including 362 link road, four national highways and one state highway were disrupted in the state due to prolonged inclement weather conditions and snowfall. NH-3 is also blocked from Darcha to Sarchu in Lahaul Spiti and Rohtang.
NH 305 is closed at Jalori pass, NH505 blocked between Gramp;hu to Lossar and NH-707 is blocked between Paonta and Shaliai due to landslides.
District Administration Lahaul Spiti said that after the recent heavy snow on NH-3 between Manali to Keylong route the Border Road Organisation has cleared the highway for only one way traffic from Solang Nallah to Keylong. Moreover the road condition is still not suitable for the movement of vehicles as there is also possibility of occurrence of avalanches here, they added.
Only in Emergency cases four by four vehicles with chains will be allowed to travel on NH-3 rest shall not be permitted till further order.
State spokespersons said that most of roads were cleared on Thursday as the weather was mainly dry and sunny.