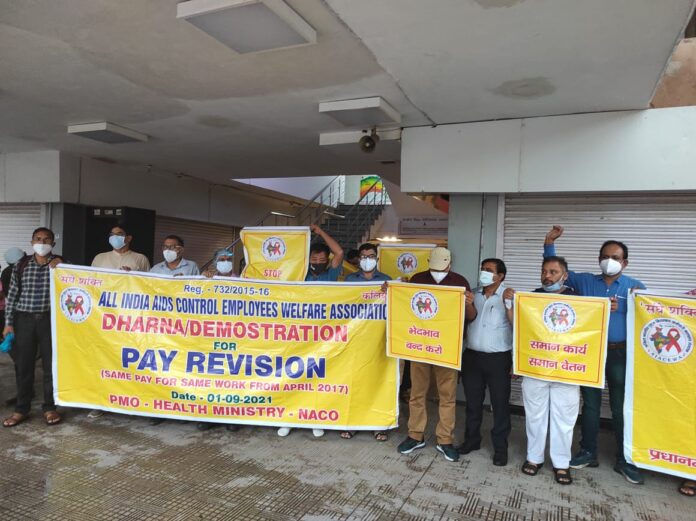 Thousands of employees from various aids control societies affiliated with All India Aids Control Employees Welfare Association staged ‘dharna’ and demonstration before the state aids control societies(SACS) state health directorate and NACO offices in the country Wednesday.
State AIDS Control Employees Association Himachal Pradesh supported nationwide call of AIACEWA staged a dharna or demonstration today before the Heath Directorate and local NACO unit at Shimla in which employees participated across the state and region in large numbers.
In a memorandum submitted to Project Director Himachal Pradesh State Aids Control Society here today president of HPSACS (contractual employees) Vinod Sharma demanded revision of of pay scale/honorarium with effect from 2017 and regularisation of number of counsellors and other employees rendering services since a long time on contractual basis with respective state and centre AIDS control bodies societies most of them are funded and supported by the NACO.
He said that similar dharnas were also held on national level moreover to this number of  staff including counsellors, technician and other employees are on pen down strike not submitting reporting of AIDS work they are rendering on the day to day basis.
Modi Government  in the centre and Jai Ram Govt in the state are not paying heed to their demands despite they were seeking wage and revision of their pay since 2017 onward.
The protesting employees alleged that despite doing commendable jobs in control of AIDS and STDs they are never motivated and incentivised by union Govt, states and international agencies like WHO and NACO.
Services to the contractual employees were allowed as per the NACO(HR) norms, as per the instructions issued through its leter on Nov 11, 2010.
The apathy of centre government and states are quite glaring as thousands of employees in the state and centre rendered their valuable services testing time and life threatening period of Covid -19 moreover four to five employees of the society have lost their lives and contracted to the pandemic.
Sharma said in a representation that contractual and outsource employees did not issue any incentives for Covid-19 duty period ( Apr 1, to 31 August 2021) in violation of National Health Mission instruction issued on July 14, 2021 by the NHM to states and SACS.
Citing a case he said that the salary of Anjana Sharma, counselor ICTC, ESI Baddi in district Solan, was not released who is on leave on medical grounds.
The protesting AIDs control employees also blamed that EPF of all the employees have been deducted for the year 2015-016, 16-17, not being reflected in the  EPF passbook from the last six years.
The protestors are also demanding same pay for
same work and end of discrimination with the senior and junior ranks officers.
The Governments and state Aids Control societies have revise the pay of senior medical officers discriminiationg number of employees, he added.

Just in – Landslide at Neugalseri in Kinnuar: Bus and truck buried