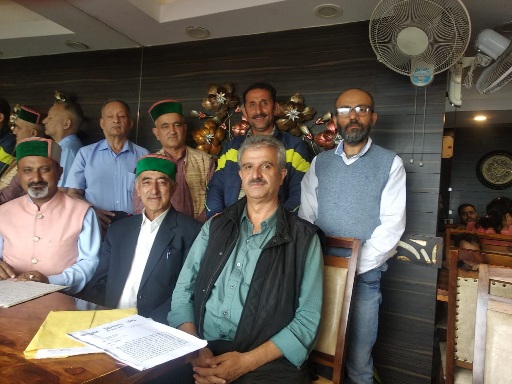 Sanyukat Kissan Munch, an umbrella body of 27 farmers and fruit growers unions, has decided to gherao the state secretariat pressing on a 20 points demand charter on August 5 at Shimla.
This was announced by the convenor of SKM, Harish Chauhan and co-convener Sanjay Chauhan while addressing a press conference today. Harish Chauhan said that Chief Minister Jai Ram Thakur, three members of his council of ministers, chief secretary,  Secretary horticulture and Agriculture had convened a meeting with 28 farmer and Horticulturist unions promising to fulfil their demand in letter and spirit; however, after passing of five days, most of their demands were pending. He said that Chief Minister Jai Ram Thakur was quite considerate on each demand, including the roll back of 18 pc GST on Apple packaging materials; however, the State government officials appear to be reluctant. As if ruining of Rs 5500 Crore apple economy is irrelevant to them, they added.
After the talk state government notified a horticulture Committee to look into their demands however baring five demands, they did not paid any heed on 15 major issues raised in the meeting, including the formation of a ‘Bagwani’ board having representative of farmer unions.
Harish Chauhan said that Goverment decided to restart the subsidy on the pesticides and drugs being used for horticulture; however, now it is too late as most of the farmers have already bought the pesticides and the schedule of spraying them in fields is already.
The decision of a six percent benefit on GST being charged on packaging materials is also taken, but HPMC and HIMFED continue to sell packaging materials at increased prices. They are selling it at Rs 75.53 per box, which is much higher. Moreover, the condition was imposed to file an affidavit and full fill performa for availing GST subsidy, is an extreme condition, they rued. Harish Chauhan asked that hike on 900 gm apple boxes is Rs 3.50 due to GST; however HPMC uh as increased the prices of apple boxes by Rs 20 per box. He said that GST on egg tray was not increased and continues at 12 percent, then why farmers are being targeted is beyond apprehension.
He said that apple growers were paying Rs 200 to Rs 250 on empty corrugated or cartoon; however, the issue on the roll back of GST is not being addressed properly.  He said that the hike on Apple boxes is being justifed by attributing it to market prices of paper and paddy and wheat husks, which is a white lay as farmers are burning paddy husks, every year.
SKM pointed out that BJP government should not ignore them as issues raised by them is affecting 24 assembly constituency in the state and assembly elections is about to follow soon.
SKM also said that Congress, CPI(M) and AAP should join them by including their issues in their election manifestos. They said that even though Congress has assured to restore the old pension scheme, however, they are silent on these issues.  Sanjay Chauhan said that the MLA from Jubbal Kotkhai Rohit Thakur and CPI(M) Rakesh Singha has promised to fight with SKM for the cause of farmers.
SKM said that the issue of MIS by hike of Rs 10.50 per kg is not enough. SKM said that the 2022 agitation by the apple growers would be historic, as farmers were forced to come out on the street during the BJP rule in 1990.
Harish Chauhan alleged that Adani agro are unilaterally deciding prices of apple crops without opening bidding is likely to further create market slums from August 20 onward.
He said neither the state Horticulture Minister nor Prime Minister had paid any head to the number of memorandums for the hike of import duties on Iran and other countries’ apples. He said that in the last five years, Chief Minister Jai Ram Thakur raised the issue of 100 per Import duties on the import of apples in the country only once, and that too did not yield any results. He said that in every election meeting Prime minister raised the issue, but nothing was done on the ground.
SKM said that APMC and Commission agents charge miscellaneous commission on the pretext of weight, loading and unloading, labour, postage, Banking charges, religious donations and stationary charges etc from the farmers, which is an indirect market fee being charged from them.
SKM said that AAP government is also charging market fee at Azadpur market should be waived off.
SKM also said that farmer were being charged Rs two per kg as CA store charges in HPMC stores; however big corporate were being charged Rs one to Rs 1.45 per kg.
He said farmers were not paid pending charges tune to Rs 45 Crore by HPMC and HIMFED under MIS howerer State government announced Rs eight crore funds to pay them. He said that no order was issued to HPMC by govt to clear the payment of farmers.
Sebutpadak sangh Secretary Sohan Thakur said that three barriers set up at Shoghi, Neri and Kudu should be removed by the APMC also, and the government apprised about it in the meeting. He said that Rs five percent market fee was deducted on Apple however state; government is only charging only one percent from big corporates who are buying apples from the farmers without auction.
Plum Growers Association president Partap Singh Chauhan said that some Commission agents continue the practice of six percent deduction as unloading or loading charges. Only five to six apple boxes were unloaded from the trucks to auction in the market but labour unloading or loading charges were being collected on the entire lots, which should be abolished.