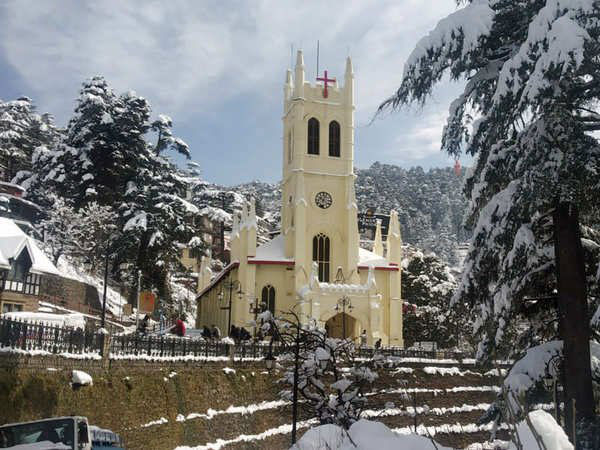 Shimla, Nov 1
Shimla, the most urban and literate assembly Constituency housing people of various regions, ethnicities, and religions, is facing a triangular contest between BJP, Congress, and CPI (M). Moreover, AAP and an Independent candidate are also in the fray.

BJP has put Sanjay Sood, who belongs to the Sood community and party, projecting him as Chaiwala (Tea-vendor), a commoner.
Meanwhile, the Congress party, which has lost three assembly elections from Shimla has put two-time party rebel and Virbhadra Singh loyalist Harish Janartha as the party contender. Janartha is the former deputy mayor and hails from Rohru area of Shimla district.
Giving these two an intense competition is former Deputy Mayor of Shimla Tikender Panwar from CPI(M). He entered public life from student politics and belonged to Solan district from a Rajpoot family.
AAP also put a Chaman Rakesh on the fray, a local businessman. An Independent candidate and young Himachal Pradesh High court lawyer Abhishek Barowalia is also in the battle along with BSP candidate Rajesh Kumar Gill and Rashtriya Devbhumi Party (an upper caste party) Kalyan Singh.
There are about 48 thousand plus the electorate in Shimla. The demography of the vote bank is divided into Employees and ex-servicemen, businessmen, Students, Apple growers, people from lower Himachal and Punjab and migratory workers etc. Most of the Employees, ex-servicemen, Apple growers, and students are from the upper area of the Shimla district. There are around 8000 voters belonging to the upper area of the Shimla district. The pollster considers that a huge chunk of these votes goes in favour of Congress.
BJP have a stronghold over the business community or traders. By putting the Sood community candidate, BJP tried to play cards of non-hills voters with a strong presence.
Interestingly, out of seven candidates, only two belonged to hills, and the rest were from non-hills.
Tikender Singh Panwar, who belongs to Solan district, has a stronghold on Employees, hotel workers, migratory workers, and Muslim voters. Congress candidate has a stronghold among Congress business voters, employees and apple growers.
BJP MLA Suresh Bhardwaj won in the 2017 Assembly poll by a margin of around 1903 votes as Bhardwaj got 14012 votes, Harish Janarth (Independent) 12109, Harbhajan Singh Bajji(Cong) 2680 and Sanjay Chauhan (CPI(M) 3047 vote. Congress could have won from Shimla in 2017 if it didn’t deny a ticket to Janartha; however, the party did not make the same mistake this time.
Suresh Bhardwaj, who is Urban Development Minister and Law Minister, did not get the ticket from Shimla and was given a ticket from Congress Bastion Kasumpti. Sanjay Sood is the party Shimla Mandal Chief and a greenhorn in the state electoral politics. He was elected Shimla MC councillor on a BJP ticket. He is the party treasurer. Sood is considered to be leading the 12000 to 13000 Sood community votes, and it is presumed that he may succeed in garnering 75 pc of them. In this case, he would have a humble beginning of at least 9750 minimum votes.
However, BJP is facing strong anti-incumbency and could have to bear a loss of many votes. Also, around 4000 Gharwal or Uttrakhand votes may be polled in favour of Sanjay Sood or Tikender Singh Panwar, as both candidates are strongholds in the community.
Panwar was elected in 2012 by Shimla Municipal Corporation as Deputy Mayor in a direct election and got 17800 votes defeating BJP, which even then had a strong presence in every street and Colony. He is riding on a bicycle from one ward to another and is a famous face in the town. Moreover, he is lashing out at the BJP triple-engine Government for misusing public funds on reckless concrete and super iron structures and removing chiselled stone walls with heavy RCC structures. Panwar also lashed out ruling BJP for installing flower pots in the jungle, exposing Shimla MC’s misuse of world bank and Asian Development Bank funding for building logistics and upgradation of mobility and water and sewerage system covered under the Smart City project.
Also, Sanjay Sood, however, could not be directly held responsible for the mess but being a BJP face may have to owe to the consequences of such allegations. Even the delay of the Shimla MC Election. It is also alleged that they couldn’t be held in time due to the administration’s faulty delimitation process under the garb of the state government.
Harish Janartha, who had the support of Virbhadra Singh earlier, is canvassing without him now. If Employees and pensioners in large numbers in the state capital may vote for OPS alone, which Congress has promised, then Janartha stands a fair chance. There is a sizable section of Congress business voters, which may also help Janartha.
BJP, which had accused Harish Janarth of having strong links with drug and Liquor cartel, also succeeded in confining him in 2017 at under 12110 votes. However, the same issue has yet to be figured against him this time.
It is also assumed that Suresh Bhardwaj, a four-time MLA with a sizable 4000 to 5000 vote bank, may prefer Tikender Singh Panwar or NOTA.
Anti-incumbency also figures among hill voters against BJP as the party could not handle successive apple seasons and stood with corporate houses. The businessman and apple growers have a sizable presence among voters, agitating against exorbitant GST on packaging material and packed food items. AAP, is likely to confine its campaign in lower Himachal Pradesh. The OPS, inflation, infrastructure and urban development, like parkings, road expansion and transport, are some of the big issues among voters in the constituency.

Why anti-incumbency wave against BJP

Triple-engine government have incumbency among the electoral as present MLA Suresh Bhardwaj, who is winning consecutively for three terms. During BJP, MC and government the, Shimla town faced the most extensive water crisis of the last two centuries. The Shimla Development Plan, which affects voters of towns and suburbs, was declared illegal by National Green Tribunal. BJP came out with a controversial free housing scheme for the slum dwellers by passing legislation in the last monsoon session that couldn’t bring the issue to a logical conclusion. Out of 41 Smart City projects 25 couldn’t be completed due to the NGT blanket ban on multistorey construction in the core and heritage area. No progress was made to make an alternate Transport system, and privatisation of the water and sewerage system forced the consumer to bear the brunt who were left to hefty bills.
Jai Ram Thakur providing relaxation in power and water supply in the rural areas vis a vis to urban has discriminated urban areas by putting a massive burden of tax, user charges and fuel prices on the customer. Urban women have to face costly LPG cylinders, exorbitant school fees, etc. State Government couldn’t regulate the private school fee issue to end the monopoly; moreover, fees were increased many folds in public education and professional institution, putting every household to depend upon educational loans.
State government could not declare increased instalments or release dues to Employees and pensioners after implementing the sixth pay commission. The state government could not provide solace to the dependent of those employees who died during the service. Rejecting their demand for the old pension scheme, Jai Ram Thakur challenged the employees to fight assembly polls if they were to keen to seek pensions like MPs and MLAs.

Kaul Singh fighting for the 9th term, against own ‘protege’