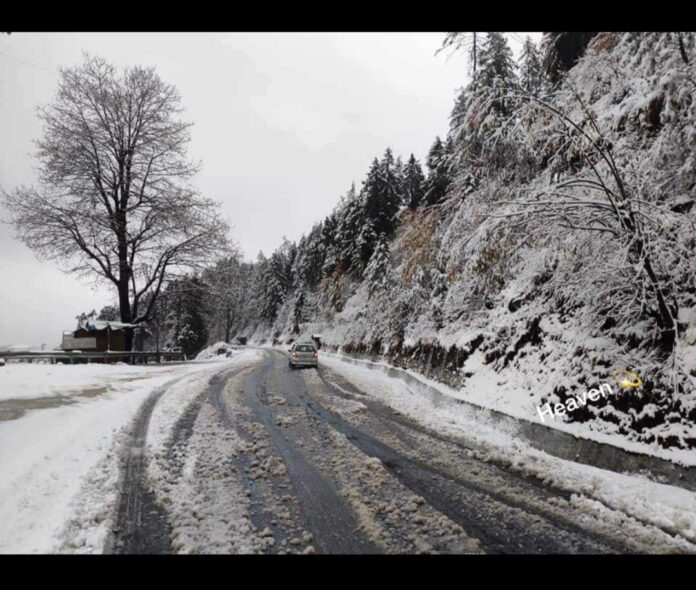 The tourist sking paradise around state capital Narkanda at the height of 8885ft from the sea level received first spell of Snowfall on Monday as the other high reaches of Shimla, Kinnuar, Lahaul Spiti, Chamba, Mandi, Kullu and Kangra district also had moderate to heavy snowfall which is continuing for last evening.

This hill state was facing prolonged dry spell since last three months also ended drought like condition as widespread rainfall is recorded in most places of the state.
Report arriving here said that tourist resort Narkanda of Shimla district recorded 30 to 35 cm Snowfall (one feet) which partly affected Vehicular traffic on Hindustan Tibet National Highway due to mounting of snow.
Resident of Shilgran Shantha village of Chopal Kuldeep Chauhan said that early snowfall on Nov 15  broke all records of past as 25 to 30 cm snowfall already had in the area.
As the people came out from their homes in early hours in the high reaches of Jubbal Kothkai, Chopal, Balson, Rohru and Kotkhai they found the hills, dales, houses and their fields clads thick blanket of snow today.
Keylong of Lahaul Spiti already had two to three spell of Snowfall also snowing along with other areas of district.
It is first winter season when Lahaul Spiti district is not disconnected by the snow after having heavy snowfall on Rohtang pass which is called the gate way of district after Commissioning of all weather Rohtang tunnel recently.
Dhauladhar ranges of Kangra, Jalorijot of Kullu, Sachpass of Chamba, Lady of Keylong Seven sisters hill Goshal hill Baralacha and Kunzum pass of Kaza in Lahaul Spiti, Kinner Kailash of Kinnuar, Hatu, Chanshal pass, Dodra-kawar, Churdhar of Shimla and Haripur Dhar of Sirmuar also recorded Snowfall which is continue since last night.