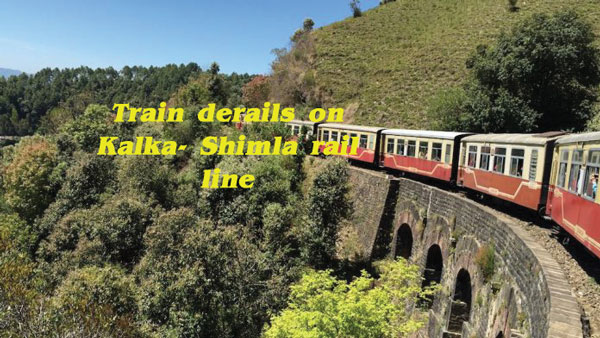 The movement of all trains remained suspended for over four hours after the Workman Special train derailed on the World Heritage Kalka-Shimla railway section in the forenoon near Barog, on Tuesday.

The accident took place at Barog railway station located between Kalka and Shimla at around 11 am, when the train was on way from Kalka to Shimla.  As soon as this train reached near Barog railway station with the railway staff and drinking water tanks, the tires of one compartment slid down from the tracks, threatening to overturn the train.   However, the timely action of the train driver helped in controlling engine.  Seeing the seriousness of the matter, the Divisional Railway Manager (DRM) Gurvindra Mohan Singh from Ambala also reached on the mishap site and took stock of the situation.  Accidental van and a relief engine from Kalka narrow gauge shed reached Barog to repair the track and the track was repaired after reaching here.

Special train 04516 down going from Shimla departed for Kalka about two hours late due to the incident.  Apart from this, other vehicles also left ahead of their schedule on some delay.  The incident took place around 11 pm and the track was restored for smooth movement of railway traffic at 3 pm.  The Work Man Special train was started on the Kalka Shimla Narrow gauge route on April 14, 2020 at the time of Covid-19.  Two passenger train coaches are included in this train.  After the accident, high officials from Ambala and a team of engineers and mechanic from Kalka also reached the spot.

Senior officials will investigate the case

This is not the first time the train’s bogie has derailed on this narrow gauge railway route.  Even before this, passenger train vehicles have derailed many times.  DRM Divisional Railway Manager Gurvindra Mohan Singh told that a committee of higher officials will investigate the causes that led to derailment of bogie.  DRM said that it is a work man special train whose first compartment with engine was derailed.