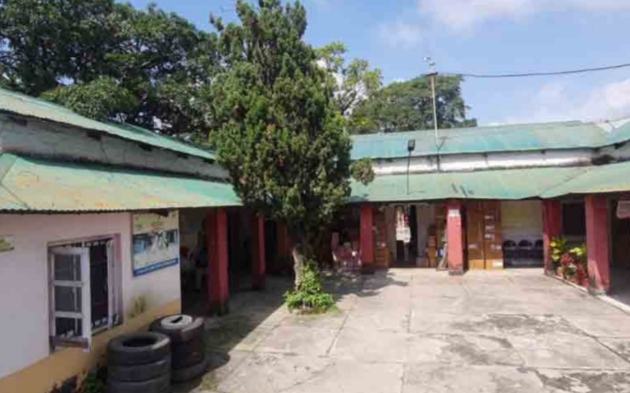 Nahan Oct 5
As many as 80 employees and health workers of Chief Medical Office Nahan in Sirmaur district are working under the threat of a unsafe building.
State Government was caught unaware recently when a eight story building fell turtles rendering loss of six crores rupees and leaving one dozen families without roof in the rainy season.  Laxity of urban development and state officials is quite glaring as its own 80 employees are working under the constant threat of a unsafe CMO builing at Nahan.
Discharging duty of working Chief Medical Officer  Dr. Sanjeev Sehgal said that the condition of  building is pathetic and yet it could not be shifted to any safer place desipite that it has been declared unsafe by the Joint Committee.
The biggest problem to shift this office is lack of  such big premises in the town, he said that the
administration and the government have been made aware about the condition of this building many times.
A committee headed by SDM Nahan inspected CMO building on November 28, 2017 in view of the dilapidated condition of the building. The multi storey premises built  during the British Raj day was declared unsafe by the committee.
Now it has been almost four years but this building is still in service continuously as CMO office is running from here .
The age old building has been house for ladys hospital however now its condition is pathetic and the walls have opened and wooden frames of the roof has been rotted badly due termities infestation.  As the water drips from its roof in the rainy season, employees are forced to sit on the table with a bucket or box.  The employees lamented that many times plaster from the walls and ceiling fall on the ground. It is surprising
to know that the office of Assistant Drug Controller from Solan, Shimla to Kinnaur including district Sirmaur is also running in this building.
Along with this, this building also houses the store of medicines sent to the hospitals, PACs and CHCs of the entire district.
The premises registers footfall of 80 employees and 50 others every day who come here for medicines supplies.

No plan to create any new districts in the State: HP...