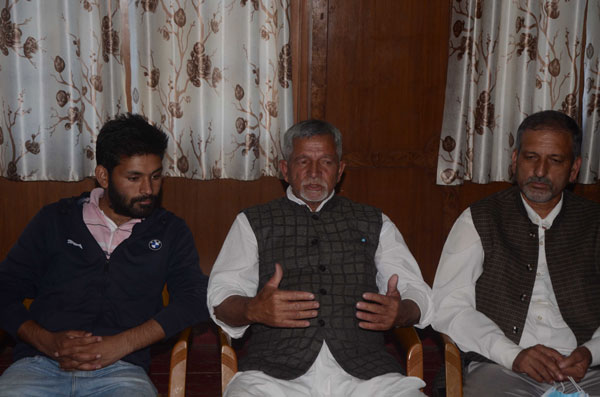 Shimla, Oct 6
Himachal Pradesh Kissan Sabha alleged that the front runner for BJP Assembly tickets from Arki constituency bye election Rattan Singh Pall is a middleman, and is holding farmers dues and is a defaulter. In a press conference held here under the banner of HKS Apple growers Rajinder Chauhan accused that the chairman of State Cooperative Development Council and BJP contender for Assembly Arki seat Ratan Singh Pal is a middleman who has deceived for Rs 70000 since last three years.
Rajinder Chauhan who is  resident of Kotkhai alleged that in 2005 he sold his produce through  Ratan Fruit Company, Shop No. 24 New Sabzi Mandi, Solan which is owned by State Cooperative Development Council President and BJP leader Ratan Singh Pal.
He alleged that likely BJP candidate from Arki, had to him pay Rs 70000 since many years but instead of making payment Pal has been threatening him.
Rajinder Chauhan said that he went to the consumer forum in 2006. “In 2010 the matter was transferred to the civil court Theog and on Dec 29, 2012, the court’s decision came in my favor directing the Pal  to pay Rs 90000 to him,” he stated. “But the commission agent Ratan Singh Pal did not even accept this order of the court and has not given my money till date.” he added.
After this, a complaint was given in the SIT formed on the order of the High Court for the apple growers, but no action has been taken against him. Till today Farmer have spent one lakh rupees in this action but did not get justice.
Rajinder Chouhan has urged the Chief Minister Jai Ram Thakur to immediately intervene in the matter to provide him justice. He said that Ratan Singh Pal is middleman should pay his dues and the government should not provide protection to the person who exploits such farmers.
Kisan Sabha expressing concern over the soft attitude of the Jai Ram government towards the arhtiyas and middleman said that this negligent attitude of the government regarding non payment of dues of hundreds of crores to the farmers and apple have trapped many of them under the grab of Arhtiyas and middleman.
Kisan Sabha alleged that middlemen are flouting the APMC Act,  by not releasing payment of farmers produce moreover government is sitting as a mute spectator.
If the government does not take action against the guilty agent, then Kissan Sabha is ready to go to any extent with their demand, they added.
It is worthwhile to mention here that Pal and former MLA Govind Sharma are frontline contender for ruling party in the bye election may announce today.