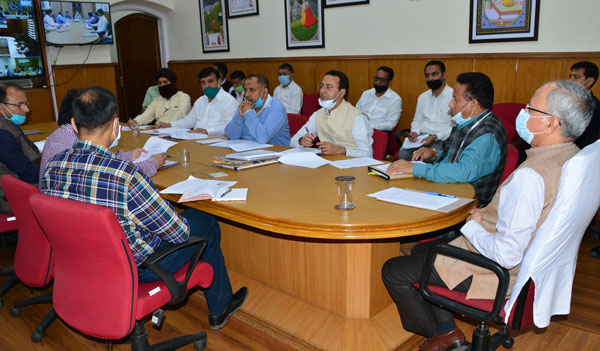 June 10, 2020
Special attention is required to be paid for dissemination of advisories besides adequate preparedness for the impending monsoon session by all the deputy commissioners, departments and other organizations so as to avoid loss to life and property during the monsoons, which are expected to be above normal as per India Meteorological Department (IMD), stated Chief secretary, Anil Khachi, while presiding over the meeting pertaining to preparedness for the approaching monsoons in the state.

Vulnerable portions prone to landslides, floods should be identified and the public works department should be proactive in positioning men and machinery so that the general public should not face any difficulty.

The areas which were likely to get cut off due to natural disasters should be stocked with sufficient food, fodder and fuel well in time. Particularly, the tribal regions of the state like Kinnaur, Lahaul-Spiti, Pangi, Bharmour, Dodra-Kawar, which often get cut off during heavy rains be provided with adequate food-grain and other essentials, remarked Khachi.

Referring to Shimla and other townships in the state, the Chief Secretary said that the Deputy Commissioners, the Urban Local Bodies, the Municipal Corporation/councils should deploy enough labour to clean the drains and avoid clogging which may result in water making ways to houses or on roads causing damage.

The people who have their habitations around river beds and nallahs prone to flooding, be sensitised about their safety and early warnings could be issued to them in case of heavy downpour.

In order to respond to emergencies effectively, relief and rescue teams need to be on high alert. The Chief Secretary stressed for sending proposals for inventory required for relief and rescue operation. Your emergency response teams needs to be sensitised during training in wake of COVID-19 as well. “The potential COVID patient if any, be need to be given assistance and, not let the lack of equipment including Personal Protective  Equipment be a reason to spread of COVID, during relief and rescue,” states Khachi.

In order to respond to emergencies effectively, relief and rescue teams needs to be on high alert. The Chief Secretary stressed on sending proposals for inventory required in relief and rescue operation.  He also directed the concerned deputy commissioners for giving immediate approvals to estimates submitted for installation of Doppler Weather Radar and for getting Forests clearances wherever required for the purpose.
He said that the Deputy Commissioners should hold review meets with the concerned Dam Authorities and make sure that compliance of adhering to advisories and warning system before releasing dam waters is in compliance to the guidelines of Central Water Commission (CWC).
So far congregations are prohibited all over the state, but if they are permitted or allowed  in times to come, we should be prepared for getting religious yatras organized mannerly  during monsoon periods keeping in mind the precautionary measures related to COVID as well, he stated.