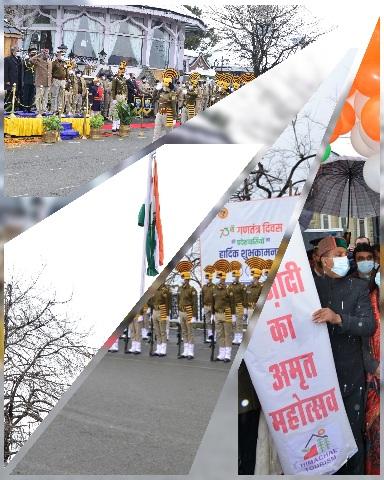 The 73rd Republic Day was celebrated with gaiety and fervour across the State today. The state-level function was organized in Shimla where Governor Rajendra Vishwanath Arlekar unfurled the National flag saluted by an impressive march past.

Functions were also organized at all district headquarters in which the chief guests unfurled the Tricolour and paid homage to the martyrs and freedom fighters who made supreme sacrifices for the Nation.

The Governor inspected the parade and took salute from an impressive march past, led by Parade Commander Capt Gurdev Singh from 2 Naga Regiment, Jutogh. Chief Minister Jai Ram Thakur and his wife Dr. Sadhna Thakur were also present on the occasion.

Amidst bad weather and snowfall, half the program took place on the ridge but after that cultural programs were organized at the Gaiety Theatre. Light snowfall started on the Ridge ground in the morning as soon as the program started. Some tableaux were also displayed after the Governor took the salute of the parade. However by the time weather started took turn disrupting the show of the event.

Therefore the venue was changed immediately. The cultural programs were organized at the Gaiety Theatre. Governor Rajendra Vishwanath Arlekar, CM Jai Ram Thakur, and other dignitaries reached Gaiety Theatre and took part in the rest of the functions.

A skit based on an awareness program regarding the Covid pandemic performed by artists of Information and Public Relations was presented. The culture troupes from North Zone Cultural Center (Punjab) also performed on this occasion.