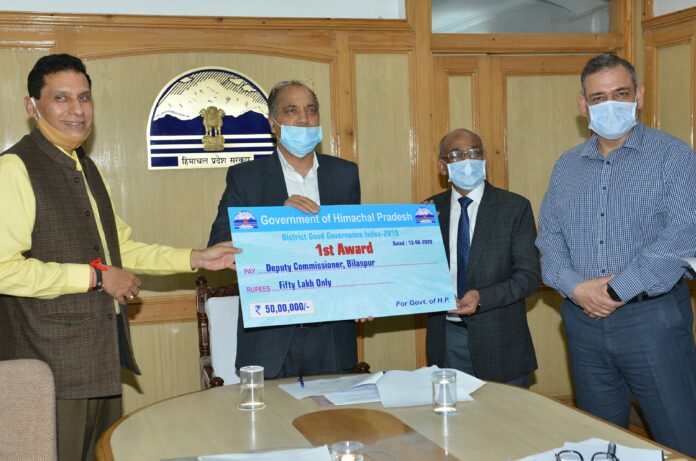 On the behalf of District Bilaspur, Deputy Commissioner Rajeshwar Goel received the first prize from Chief Minister Jai Ram Thakur here today on the occasion of releasing of the District Good Governance Index (HPDGGI) Annual Report-2019. This document has been prepared by Department of Economic & Statistics, Government of Himachal Pradesh.

Speaking on the occasion, the Chief Minister said that State Government was committed to use information technology to usher in an era of e-governance aimed at simplifying processes, bringing in transparency, accountability, providing need based, quality and timely information to all the citizens of the State.  He said that to achieve this goal, the government was implementing several e-governance initiatives in various departments of the State.

Thakur said that efforts of the State Government in respect to governance were also recognized by the Public Affairs Centre, Bengaluru and awarded Himachal Pradesh first among 12 small States consistently in 2017 and 2018 and second in 2019 on the Public Affairs Index (PAI).   Himachal Pradesh was the first State in the country which has started to measure the quality of governance in vital sectors.  The welfare of the common people of the State has always remained the primary focus of the State Government, he added.

Chief Minister said that the second report on District Good Governance Index has been prepared by Department of Economic & Statistics on the basis of secondary data of 12 districts, collected on broad 7 Themes, 18 focus subjects and 45 indicators to assess the comparative performance of all districts.