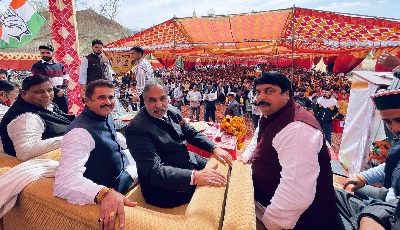 Lashing out at the ruling BJP for pushing the Nation towards economic backwardness, senior congress leader and MP Anand Sharma today said that Himachal has not witnessed speedy progress during the past four years of rule while inflation and unemployment have made the lives of the common men more miserable.

Addressing a public meeting at Mandhala village in Doon constituency of Solan district, Sharma said that today there are many questions which the public were raising but the ruling party leaders have been turning their backs towards the common man’s problems.

There is no employment for youth, and there was an economic slowdown in the country.  The Central and State governments should think about employment and make plans so that opportunities can be ensured in coming times.

The BJP, which came to power with the promise of 2 crore jobs every year, has betrayed the youth during the past eight years.

Emboldened over the crowd in the public meeting, he said that if such a crowd has gathered in a recently decided programme at Doon assembly segment, is a certain indication that victory of Chaudhary Ram Kumar in Doon is inevitable.

On the occasion, State Congress Vice President and former MLA Doon Ram Kumar Chaudhary said that in the last four and a half years, the BJP MLAs could not even complete the works started during the regime of the Congress.  The works of bridges, school buildings, college building, Baddi hospital building, Degree College Brotiwala building, polytechnic college building are lying incomplete. The budget of two bridges, Baniyadevi bridge, Kuthad bridge, Khairanwala, Baguwala-Kainwawala bridge, Lodimajra Banbirpur bridge, Chunari bridges on the Gambhar khad were approved in the Congress regime but yet could not be completed, till date.  The MLA’s own home road, Bhud Bhatauli Patta, is in poor condition, he stated.  Rs 3 crore was sanctioned for Mandhala- Gunai- Ghadgal Road, however the money for the same was diverted to Kasauli, which the MLA was not aware of, he alleged.

A budget of Rs 700 crore was spent on development in the Doon Vis region during the tenure of the Congress.  Adding, Viz.a.viz the, BJP has completely failed in getting the works completed which were approved during the Congress tenure.  Today the people of Doon have termed the BJP MLA as a failure.

He said that MLA Paramjit Singh Pammi has failed to bring new development projects in the last four and a half years.  The budget of BBNDA was Rs 72 crores during Congress tenure, which was reduced to 14 crores during the BJP tenure.

Former CPS and others arrested for breach of peace