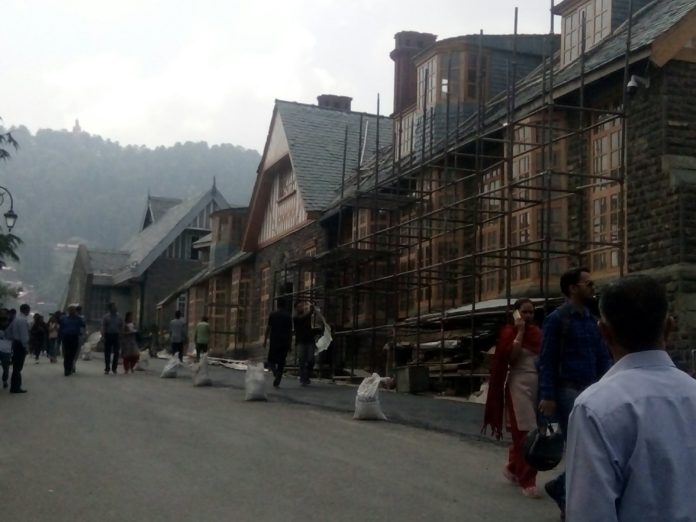 After years of restoration and court room wars finally the solution for Municipal Corporation Shimla building is drawn today. The century-old iconic Town Hall building on the Mall will  house the offices of Mayor and Deputy Mayor of the Shimla Municipal Corporation (SMC) as the High Court on Friday ordered that a high-end café, reading centre and handicraft boutique may be set up in the recently restored building.

The issue of handing back the British-era Town Hall building, which had been restored under an exhaustive Rs 6 crore conservation project, back to the SMC was settled by the court order on a public interest writ. The Town Hall was restored under a Conservation project by the Asian development Bank (ADB)  executed through the Tourism department. After completion of work, the SMC had sought handing back of the building whereas there was a demand from civil society and citizen that the iconic building must be put to some good use and be developed as a tourist attraction, considering its vantage location on the Mall, in the heart of the town.

A division Bench comprising of Chief Justice V Ramasubramaniam and Justice Anoop Chitkara passed the order, which stated that the building be handed over back to the SMC, but it will be put to other uses and not house any office other than the Mayor and Deputy Mayor. The court also observed that beyond issuing a direction to the Shimla Municipal Corporation to protect the heritage vale of the Town Hall, it cannot issue directions, which will infringe upon the property rights of the MC.

As such, the MC Commissioner, Joint Commissioner and other officials whose offices were located here will now have to be accommodated elsewhere.

The court also directed that the MC in consultation with the state government may put to use the rest of the area, for housing a high-end café with reading facilities, Information Centre and boutique of traditional crafts and arts for attracting tourists.

The court also directed that an entry fee can be imposed, which will provide handsome revenue to the MC to service the loan. The state government had placed before the court, a conceptual plan, which contained proposal for using certain portions of the Town Hall as a major tourist attraction.

Take action against firms responsible for death of four workers in...