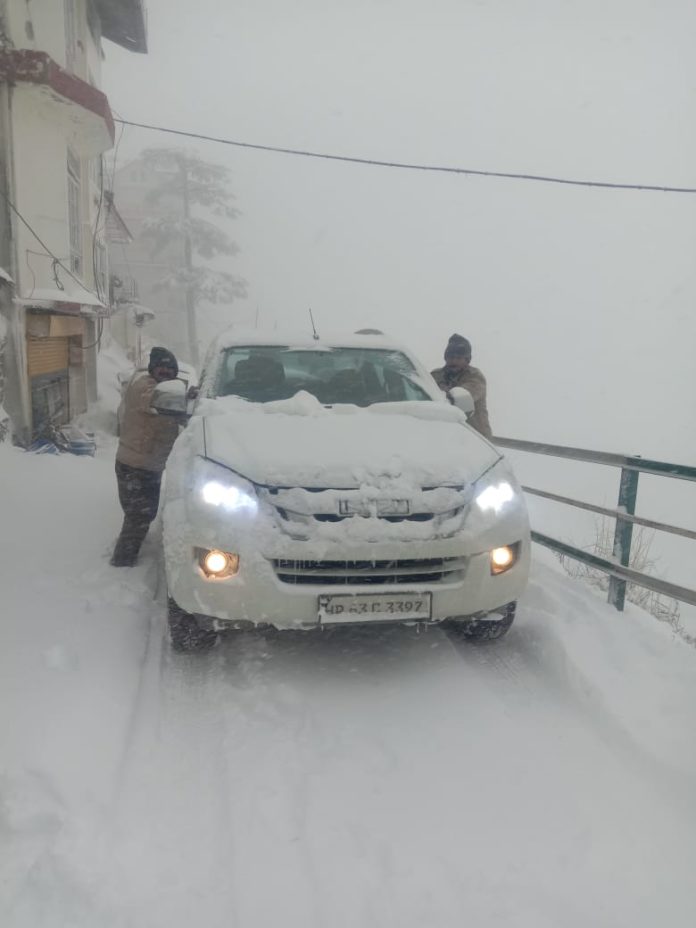 Even as thousands of tourists from lower plains have started for the hill state after getting news of snow, there are reports that power supply is disrupted in many parts of the capital city. The Benmore and surrounding wards in the mid of the town had no power till filing of the report. Besides even other parts of town were facing erratic power supply.

Offices, restaurants and clubs though were open in town but there was very thin presence. It is advised for the tourists that they should not venture out of their hotels and rush to the tourists resorts from their home until vehicular traffic is being restored in the town.

Besides problems, the late snowfall also eased out the concerns of farmers as they had recently planted new apple plants in their orchards and it required agood spell of rain or snow. The good spell of snow is also considered beneficial for the apple and Rabi crops.
Snow called white manures not help to reduce the use of pesticides in the apple plant and other crops moreover also provides good number of chilling hours required for good yield. As per experts a minimum 900 to 1000 chilling hrs are required for yielding good varieties of apples and other pome fruits.
A progressive farmers from Thana village of Jubbal Goind Chitranta said that they have planted new apple plants in their orchards which were in dire need of moisture that is likely to be compensated with this good spell of rain and snow .
In the low line areas state is having a good spell of rainfall which was very much required. The Wheat, Barely, Peas and pulses, Rabi crops need about 15 mm rainfall for a good yield. State which currently has a very negligible area under irrigation would be benefited with this good spell of rainfall.
The Month of January was mostly dry this year but the rain in the month of February is considered good, informed a local farmers Nand Lal of Bakaisu village.

Reports have already started arriving about visitors rushing to the state to witness snow. Besides once roads are opened this footfall is likely to get increased.

Police solve the gory crime of mysterious consignment of a dead...