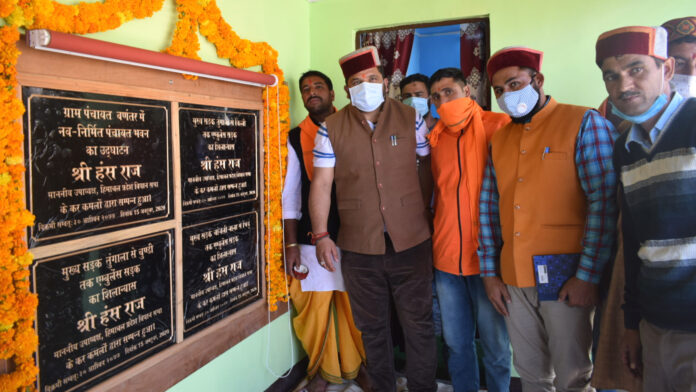 Chamba, (Teesa) 15 October
Vidhan Sabha Deputy Speaker Hansraj said that the construction works of the under-construction drinking water scheme for five gram panchayats of Himgiri region will be completed soon. The Speaker of the Legislative Assembly was speaking while addressing the public meeting held in Sandaruni village on the occasion of the inauguration of the newly constructed Panchayat Bhawan Vanatar at a cost of Rs 12 lakh today.
Hansraj said that the work of drinking water scheme under construction with a combination of ten different schemes for Gram Panchayat Himgiri, Vanantar, Chieh, Pangei is in the final stage. He said that this drinking water scheme will be launched within the next four months. With the smooth implementation of this scheme, uninterrupted drinking water supply will be available to about 9500 population of the area.
He also said that the tender process for the construction of the proposed drinking water scheme for Gram Panchayat Oil at a cost of 90 lakh rupees has been completed. Construction work will be started soon.
In his address, the Deputy Speaker said that under the ambitious Pradhan Mantri Adarsh ​​Gram Yojana of the Government of India, Satyas, Shatneva of Churah Assembly constituency and
Chihi village is included. The scheme covers drinking water, sanitation, education, health, nutrition, social security, rural roads, housing, electricity, clean fuel, agricultural practices, financial inclusion and digitization works with the objective of providing basic amenities to the people. He said that for the successful implementation of this scheme, an amount of ten lakh rupees has been released as the first installment.
The Deputy Speaker of the Legislative Assembly earlier inaugurated the newly formed Gram Panchayat Bhalori. He also laid the foundation stone of ambulance road from Tungagala to Chilli and Chanjali Nala to Bhihu and main road Chundi.
During the public meeting held in Qila Nuran village of the newly formed Gram Panchayat Bhalodi, the Deputy Speaker of the Legislative Assembly announced an amount of ten lakh rupees for the construction of the Panchayat building. On the demand of the local people, the State Secondary School Khangu was also assured to be upgraded to the High School.
Hansraj also asked the horticulture department to chalk out an action plan to start cluster-based schemes in this area in view of the immense potential of horticulture. He also called upon the local youth to cooperate with the department for forest protection and promotion works.
During this period, officers of various departments including District General Minister Virendra Thakur, Vice President Baldev Ram, General Minister Muniyaan Khan and Yashpal, Scheduled Caste Morcha President Govind Kumar, Yuva Morcha Vice President Kulwant Sharma, General Minister Minority Morcha Yakub Khan, Local Panchayat President Gulshan Begum and Bhil Ram Representatives of the Yuva Mandal Mahila Mandal Panchayati Raj Institutions and local dignitaries were present.