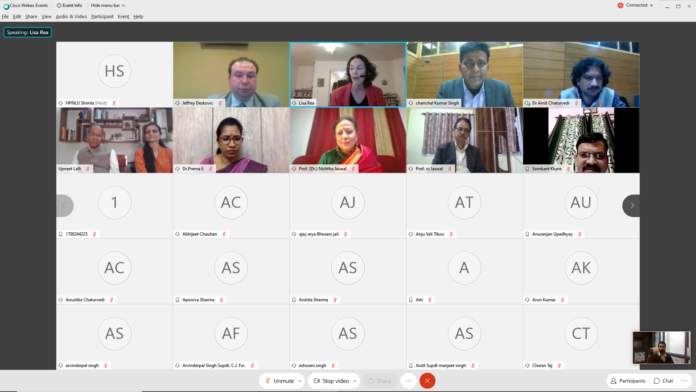 The Himachal Pradesh National Law University, Shimla in collaboration with the Institute of Correctional Administation, Chandigarh organised an online One-Day International Conference on “Restorative Justice and the Challenges of Twenty First Century”.

The event witnessed participation of more than 200 participants, belonging to Judiciary, academics in Law and other social sciences, Police and Jail administration from across Indian states, the United States and Australia. The Plenary Session was held between 6.30pm-9.30pm. The Plenary Session of the Conference was also graced with the distinguished presence of Dr. Lisa Rea, President, Restorative Justice International (RJI), effrey M. Deskovic, Director, Jeffrey Deskovic Foundation for Justice and Dr. K. P. Singh, former Director General of Police, Haryana and. The Conference ended with the concluding remarks by Dr Upneet Lalli, Deputy Director, Institute of Correctional Administation, Chandigarh.

The congregation of experts, scholars and officers of enforcement agencies concluded that the traditional legal and justice dispensation systems have failed to heal, repair and restore individuals wronged by crimes and maintain social relations, sentiments and connections. The idea of restorative justice is the way forward. In India, the Restorative Justice movement is still taking its roots and when operationalized, this movement has immense potential to reform judicial and legal systems and implementation of law and delivery of justice in the true sense of the term.

The day-long event was attended by Jailors of Central jails, Senior police officers of more than six states of India, including Haryana, Himachal, Rajasthan, Punjab, J&K and Uttar Pradesh.

Sanjay Kundu, Director General of Police, Himachal Pradesh addressed the audience as the Guest of Honor and highlighted the challenges met during the practical application of the idea of restorative justice.

HP CM urges people to use helpline numbers in case of...