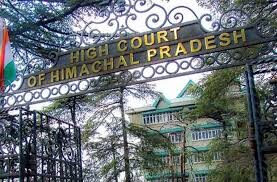 The Court directed the State to give compassionate employment to the petitioner, if she is eligible and fulfills the criteria prescribed in the apt compassionate employment policy.
The Division Bench comprising Justice Sureshwar Thakur and Justice Chander Bhusan Barowalia, passed these orders on the petition filed by Mamta Devi, who has alleged that her father, who was a Class-IV employee in the office of District Ayurvedic Office, Kullu, died in harness and she herself, her sister and her mother are his only survivors and there is no male member in their family.

She has alleged that she applied for appointment on compassionate grounds as her mother and sister were unwilling to opt employment, but her application, though duly supported with the affidavits qua “No Objection” of her mother and sister and latest income certificate, was rejected on the grounds that there is no provision in the Policy for grant of employment assistance to married daughter of the deceased Government employee.

She has sought directions of the Court to struck down Clause (2) of the policy and also to quash the orders rejecting her case for employment assistance. The petitioner has also sought a relief that the State be directed to consider her case for appointment on compassionate grounds.

While allowing the petition, the Court observed that the object of compassionate employment is not only social welfare, but also to support the family of the deceased government servant, who dies in harness, and by excluding married daughter(s) from the sweep of the family, the real purpose of social purpose cannot be achieved.

If the marital status of a son doesn’t make any difference in the eyes of law, then it is difficult to think how marital status of a daughter makes such a huge difference in her eligibility. If a married son has right to compassionate appointment, then a married daughter also stands on the same footing and her exclusion does not have any plausible basis or logic, so her exclusion has no justifiable criteria.