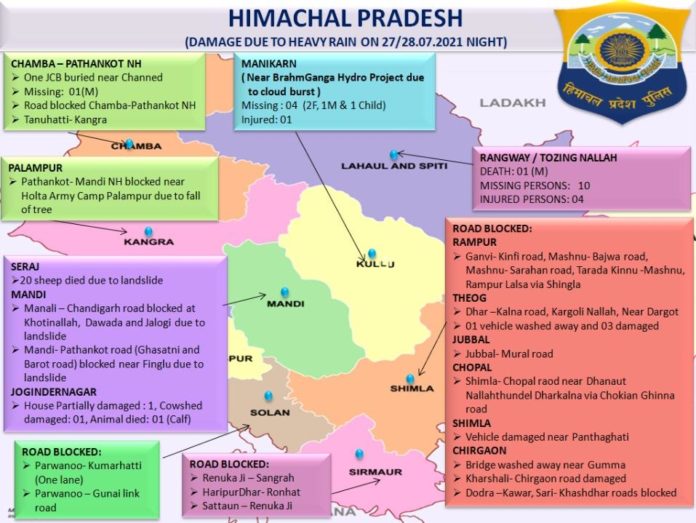 Death toll of monsoon season has gone up to 202 in Himachal Pradesh as 16 people died in last 24 hrs, nine bodies have been recovered and seven are still missing.
State Disaster management authority said in the press release issued here today that 103 People killed in rain related road mishap, 24 falling from road, building and cliff, 21 died in landslides, 19 drowning, two in fire, seven in snake bites, three in electrocution, four in slipping from the height and glacier, one in man animal conflict and nine in other mishap.
Spokesperson said that bodies of seven person died in Lahaul Spiti in flash flood incident at Tozing Nallah were recovered and three were still missing rescue operation to traced the bodies is being conducted by the ITBP and State Police Jawan. All the ten killed in the mishap  were labourer who were staying in a tents which were washed away by the flash flood.
In Mankiaran area of Kullu district four persons were washed away while they were crossing a nallah near Parvat river early this morning. The bodies of deceased including a woman, four year children, a local and tourists could not traced out so far.
Two person died early this morning in Chamba district as a JCB was washed down by a flashflood in Salooni area and one person died after falling from a cliff. In last 24 hrs six persons were injured in rain related mishap.
Shimla district recorded loss of 32 lives, 22 in Kangra, 20 in Sirmaur, 19 each in Mandi and Chamba, 17 in Lahaul Spiti district16 in Kullu,  15 in Solan, 14 in Kinnaur , 12 in Una and 11 Bilaspur and five in Hamipur.
Road mishap alone took toll of 24 People in Shimla, 18 in Sirmuar, 15 in Solan, 10 in Chamba, nine each  in Una and Mandi five in Kullu, Four  in Bilaspur, three each in Kinnaur and Lahaul Spiti, two in Hamipur and one in Kangra district.
Kangra district witnessed monsoon fury recently as ten people died in landslides and eight due to drowning in Shahpur area the district. It is followed by Kinnaur district as nine Tourists killed in tragic landslides at Batsari area of Sangla valley and three others injured.
Eight people drowned in Kangra , three each have drowned in Mandi and Kullu, two in Bilaspur and one each in Shimla, Hamirpur and Lahaul Spiti in the monsoon rains and flash flood. Seven people died in flashflood and cloudburst in Lahaul Spiti district on Monday night, two in Chamba.
In the state as many as 387 roads and five bridges have been washed away or damaged in the flood as 70 roads are disrupted in Kullu, 69 in Sirmaur and 59 in Shimla and 55 in Lahaul Spiti district.

Power supply has been affected in 345 places and water supply 175 places . Four bailey bridges were damaged or washed away in Lahaul Spiti district and one in Shimla district.
Nine houses were completely damaged in the state,31 are partly damaged. Heavy rain also dmaged 32 cowsheds.
In the Monsoon rain 393 animal or livestock worth Rs 26.4 Cr have been killed and Monsoon rain have caused cumulative loss of Rs 5029 Cr to public and private property in the state.