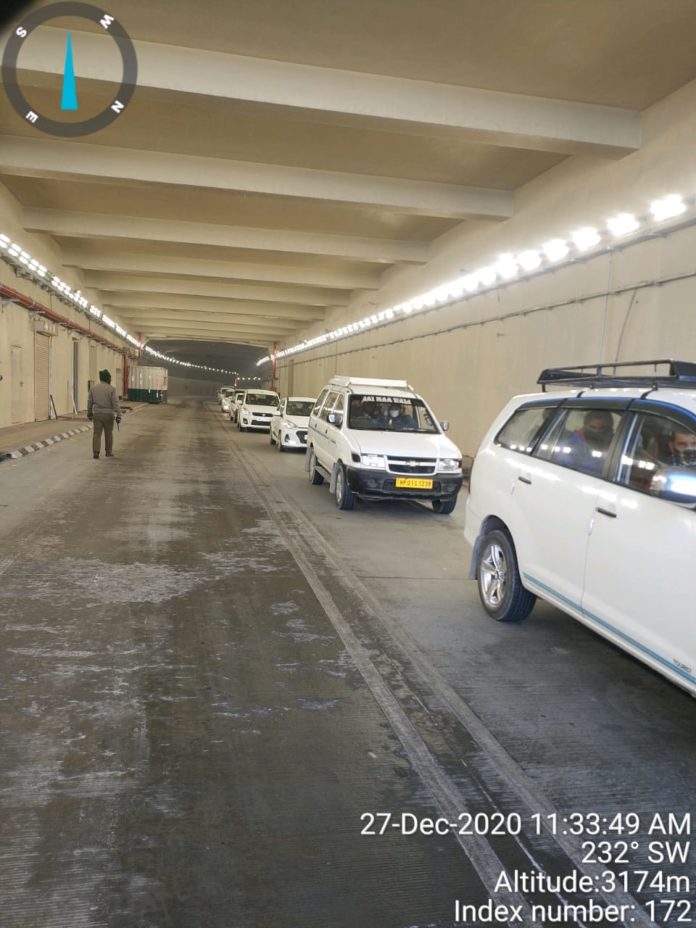 More than five thousand vehicles crossed the Atal Tunnel Rohtang from both ends, on Sunday which was the highest traffic till date. Director General of Police Sanjay Kundu informed here today that total inflow to Lahaul was registered as 2800 vehicles while total outflow from Lahaul remained 2650. Moreover, around 200 vehicles were still in Sissu helipad parking area he added.

He informed that the State Police has made elaborate arrangements to ensure smooth traffic flow from Manali onwards up to Lahaul Spiti district keeping in view the large number of tourists visiting Atal Tunnel Rohtang.

Prajsing the force he said that the State Police was managing the bumper traffic in an excellent manner and it was being ensured that the tourists visiting this tourists place from various parts of the country do not face any inconvenience.

Pertinent to mention that the Atal Tunnel Rohtang has become a major tourist destination of the country in a very short period of time. The tourists were preferring to visit the beautiful snow bound valley of Lahual and they were particularly interested to see Rohtang Tunnel.

Kundu further stated that the police department had made special arrangements to ensuring smooth traffic flow from both sides of the tunnel.

Likewise Manali even Shimla is witnessing a flood of tourists. On December 26 a total of 5422 vehicles were reported to have crossed Shoghi towards Shimla.

Least expected amidst ongoing pandemic and restrictions, tourism business has witnessed a welcome spike in the last 2 days bringing cheers for the industry stakeholders. Reports indicate that many tourists were left stranded on roads due to lack of room on 26th night.

For smooth flow of traffic and traffic management during tourist season Shimla City is divided into 8 sectors. All sectors are supervised by GOs (supervisory officers). Also there are duty magistrate in each sector. Drone is being used for traffic surveillance. Beside 200 traffic constables 5 reserves are deployed. Also staff of all Police Stations of Shimla City is being used. QRT ( Quick Reaction Team)and SAG ( Special Action Group) is also deployed. PCR vans, Interceptors, motor cycle riders are also used.