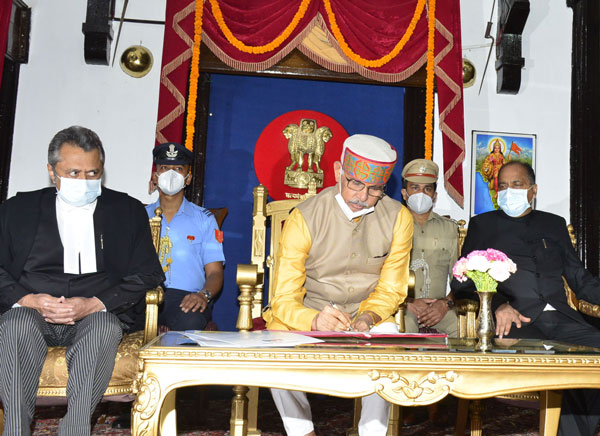 Cabinet Minister in the Government of Goa and a former speaker of the Goa Legislative Assembly Rajendera Vishwanath Arlekar today took oath of new Governor of Himachal Pradesh replacing Bandaru Dattatreya from this post who was transferred as Governor of Haryana recently.
Acting Chief Justice of Himachal Pradesh High court Justice Ravi Malimath administered the oath of  office and secrecy of Guv Office to  new Guv Arlekar in a short but impressive ceremony held here at Rajbhavan this morning.
Chief Secretary of Himachal Pradesh Anil Kachai conducted the oath taking ceremony in the presence of Chief Minister Jai Ram Thakur,  Lady Guv Anagha Arlehar, Cabinet members of Jai Ram Govt Suresh Bhardwaj,  Govind Singh Thakur,  Dr. Rajiv Saizal,  MLAs, Justice P.S. Rana, Chairman, Human Right Commission, Narender Chauhan, Chief Information Commissioner, Ajay Sharma, Chairman, HP Public Service Commission, Mayor, Satya Kaundal, DGP Sanjay Kundu, Ashok Sharma, Advocate General, Chairman, Vice-Chairman and Members of various commissions, boards and corporations,  Vice-Chancellors of Universities, senior officers of the police and civil and other prominent people were also present on the occasion.
Chief Secretary read the warrant of appointment of new Guv. Arlekar took the oath in Hindi. He would be the 28th Guv of Himachal Pradesh.
Arlekhar arrived here last evening who was welcomed by Chief Minister Jai Ram Thakur and member of his council of minister. The Guv was also given an impressive guard of honour on this occasion by the Rajbhavan security guards.
Later, interacting with media, new Guv said that he would take the initiatives of the state government forward. He said that it was a higher post of constitution and he would work in coordination with the Govt.
“I will give whatever support the Govt. needs in development. We would work together for the protection of the rich environment of the state”, said the Guv.
Arlekar said that he was impressed by the hospitality of the people of the state. He said that many people from Himachal Pradesh have contributed towards the Goa Liberation Movement and Ram Singh was one of them. “I would try to meet his family”, he added.

Half an hour in morning/45 min in afternoon time to get...