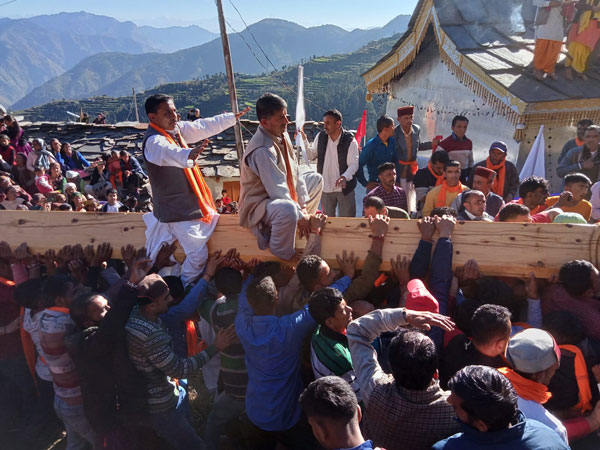 Nahan Oct 16
Himachal Pradesh also known as land of gods or Dev-Bhoomi is ruled by the deities residing in every part of the state. This faith amongst residents of the hill state has been exhibiting the unique traditions and cultures since hundreds of years. Part of the various shrines and festivals of trans Giri region in Sirmaur district, a historic ‘Shanda’ festival of Vijat Maharaj was celebrated/revived in Khadah village of Gram  Panchayat Divdi Khadah on Friday i.e on Dushera.
Last time this festival was held around 32 years ago in 1989, as due to the then prevailing conditions of this village, it could not last. ” However this year it was celebrated after renovation of Vijat Maharaj’s temple in the mid of village.” informed villagers.
To increase the the longevity of the temple ‘Khunevad’ (main wooden roof ) was installed on the top of the old temple. It is believed to be the crown of Vijat Maharaj made of deodar which is installed on the roof of the temple.
Six panchayats of district Sirmaur and five panchayats of Nora Baura, Kulag, Chadoli, Bandal Kafla village panchayats of district Shimla participated and took blessings of the deity here. With chanting of Mantra and hailing of Vijat Maharaj, the work of planting  the Khunevad started. Hundreds of people performed the ritual praising Vijat Maharaj to the tune of traditional musical instruments.
Here during the entire Navratras, worship lessons were organized by nine pundits. Shanda Parv was organized on the tenth day. On this occasion, the holy stick of Vijat Maharaj had also reached from Vijat Maharaj temple located at Sarahan in district Shimla.  Which was brought by Bhandari ( treasurer ) Pradeep of 14 Parganas ( regions), informed the priest.
The priest said that this temple is two hundred years old, which has now been built in the ancient style. Apart from the deities in the temple, it is decorated with wonderful wooden art.
On this occasion, people entertained a lot by performing Rasa dance with traditional tunes and songs. A huge Bhandara was also organized for the devotees who came from outside in Shand.