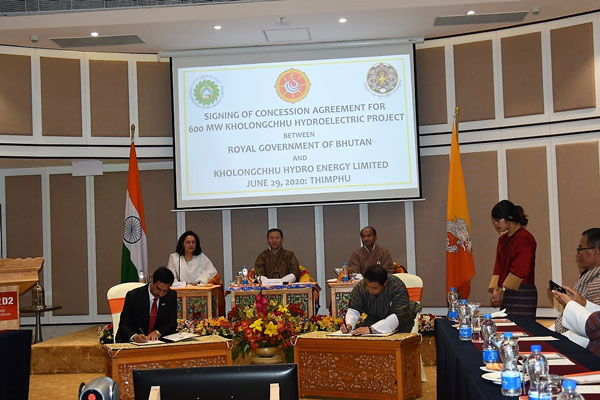 SHIMLA- June 29, 2020
Concession Agreement for implementation of the upcoming 600 MW Kholongchhu Hydroelectric Project was signed between the Royal Government of Bhutan and Kholongchhu Hydro Energy Limited (KHEL) today at Thimpu, the capital of Bhutan. The project is being implemented by KHEL which is a joint venture between the public sector SJVN Limited and Druk Green Power Corporation of the Government of Bhutan, informed a senior official of SJVN today.
External Affairs Minister S Jaishankar attended the signing ceremony via video conferencing. Lyonpo Tandi Dorji, the Foreign Minister of Bhutan, Lyonpo Loknath Sharma, Minister of External Affairs, Government of Bhutan and senior officials of both the governments were also present through video conferencing.
The Concession Agreement was signed by Sanjay Kumar Garg, Managing Director of KHEL and Karma P. Dorji, Director, DHPS, Government of Bhutan.
The agreement marks commencement of construction of the first joint venture hydroelectric project between India and Bhutan. The project is expected to be completed in the second half of 2025.
Kholongchhu Hydro Energy Limited is a Joint Venture company formed between Druk Green Power Corporation (DGPC) of Bhutan and public sector SJVN Limited of India which has already implemented the country’s largest 1500 MW Nathpa Jhakri hydro power plant in Himachal Pradesh besides many other projects in hydro, wind and solar sectors.
The 600 MW run-of-the-river project is located on the Kholongchhu River in Trashiyangtse District in Eastern Bhutan. The Project envisages an underground powerhouse of having four turbines of 150 MW each and a concrete gravity dam of 95 meters height.
Jaishankar and Dorji emphasized the importance of hydropower development as an important pillar of mutually beneficial bilateral economic cooperation. S. Jaishankar said that he was happy to join in witnessing the signing of Concession Agreement for the 600 MW Kholonchu Hydroelectric Power Project for clean energy, another example of the symbolic cooperation between two special friends.
They also recalled the trust, co-operation and mutual respect that have long characterized the unique and special friendship, anchored in mutual understanding and reinforced by a shared cultural heritage and strong people to people links between India and Bhutan.
Hydropower sector is the flagship area of India-Bhutan bilateral cooperation. The 720 MW Mangdechhu hydroelectric project was jointly inaugurated earlier in August 2019 by the Prime Ministers of India and Bhutan.
With this, four (04) hydroelectric projects of bilateral cooperation (336 MW Chukha HEP, 60 MW Kurichhu HEP, 1020 MW Tala HEP and 720 MW Mangdechhu HEP), totaling over 2100 MW, are already operational in Bhutan.