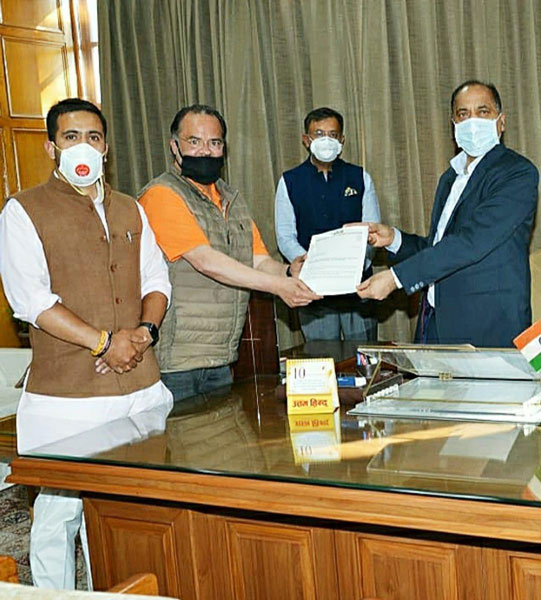 23 May 2020
A three member delegation on behalf of the Hotel and tourism industry of Himachal  along with  Vikramaditya Singh, MLA ,shimla (rural) today met the  Chief minister Jairam Thakur   about the grave situation that the hotel and tourism industry in Himachal Pradesh.
Singh informed the chief minister that since the past three months tourism units have not been able to generate any revenue therefore their capability of paying  their fixed costs like salaries,Electricity & water charges,taxes etc is close to seizure. He apprised the Chief minister that  immediate relief is required for the survival of the tourism industry which has already lost its peak season unlike other tourist states like Goa, Rajasthan and Kerala where it is low season presently.
The delegation stated that if substantial relief is not given immediately then hotels will be forced to close down due to which several associates directly/indirectly employed will lose jobs leading to mass unemployment in Himachal Pradesh.
The delegation put forward various relief measures for Survival & Revival of Tourism in HP. They demanded that a financial package be given to all hotels to cover business losses incurred during lockdown period by way of interest free loans from State co-operative Bank and other state owned banks, waiver of interest on existing term loans / CC limits availed from various banks and extension of existing term loans and CC limit with no requirements of fresh/additional collateral. No electricity and water charges be taken from hotels which are presently lying closed since lockdown. All fixed taxes, cess, license fees, govt. rentals be waived for lockdown period from April 2020 that are being charged by government of HP. Government should pay minimum wages to all hotel employees during lockdown, they stated. Adding that there are about 50,000 employees in tourism units of private & govt. Sector and the total amount will be less than 50 crores per month which should be paid by way of Direct transfers to all employees of tourism units. Also they stated that GST should be reduced to 9% for 2 years after opening of lockdown to encourage revival of tourism in HP. Adding that, hotels should be allowed to charge 9% as ‘ Covid – 19 surcharge’ to the bills of visiting customers in room & food charges to make up for the losses in sales during lockdown. They also added that completion of tourism linked infrastructure should be expedited like helipad’s , NH, state highway , link roads etc , special budget for marketing of HP as a safe travel destination etc be done for tourism promotion for early revival of tourist inflow.
Anil Walia spokesperson of the delegation informed the delegation  was assured by all that the government will soon announce all possible relief for the survival and revival of tourism industry in HP.