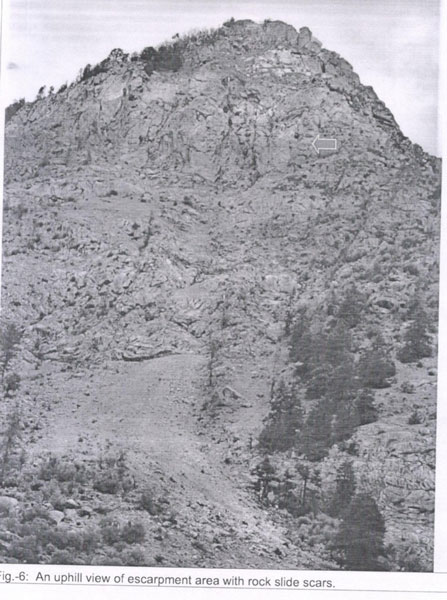 A team of Geological Survey of India after preliminary studies of Batseri land slides have warned of more such future threat. They have apprehended more rock falls or landslide incidences attributing rock slide due to presence of lot of loose granite material precariously disposed on the slope.

‘’ In view of the steep gradient of the upstream parts of debris… cone that behaved as trajectory for present landslide, the recurrence of rock fall incidence cannot be ruled out’’ the report submitted to the state Government last month indicated.

The report further said that in this effect and in view of the rainy season still remaining ahead or in case of any seismic jolt, the area should be kept under close monitoring. It is also suggested that till monsoon the restricted vehicular movement should be allowed under proper surveillance. The above pursuit of safety may also be followed in other villages or habitats in particular for those living along right bank of Baspa river.

The GSI teams visited the spot on July 25 to 30 this year, to find out or ascertain geo-scientific Causes of the massive rock fall distater which occurred at 1310 hrs on July 25, 2021 on the opposite bank of Batseri village On Sangla-Chitkul road in Kinnuar district. The incidence had resulted boulder hits smashing a min-bus  along with death of nine tourists and causality of three others including a local resident.

The report said that massive rock fall was reported to have continued for nearly another one and half minutes also resulted in severe damage of Sangla –Chitkul and Sangla –Batseri link road, collapse of the Batseri Valley Bridge on Baspa river, a public facility. The live incidence of rock fall and damages was released on various multimedia soon after the ill-fated incidence that indicated continuation of the episode for nearly 75 seconds with severe intensity and astray incidents even after hours.

Geology of the landslide area: Report said that Kinnuar is the northwestern part of the young fold mountains of Himalayas which is seismically still very active. The district falls in seismic zone-IV- V high damage risk zone (MSK-VIII) and very high damage risk zone( MSK-IX ore more). A strong Kinnuar  earthquake rocked the Indo-China border on January 19, 1975 having magnitude of 6.8 and caused massive damage in part of Kinnaur and Lahual Spiti district. The study area also lies near to the regional tectonic features in the Himalayas like main central thrust (MCT)  in general the Baspa valley including Batseri village exhibit a very fragile geo-environment condition.

The study said that Baspa valley is situated at the elevation from 1830 meter (Karcham ) to 3275m (Chitkul) and Batseri village with elevation approximately 2700 m, constitutes a high altitude area.

Manifested with Pleistocene (Geological epoch that lasted from about 2,580,000 to 11,700yrs ago) to sub recent glacial landforms and Fluvioglacial ( areas or landscape that are results of the action of glacial  melt water) deposits.

The report further states that,” Sun-shadow side area is generally gentler and with colluviums or debris cone, thick soil cover, agriculture, forest and village settlements. In view of immature topography and active Fluvioglacial process, the Baspa valley area possesses a fragile geo-environment condition,” it added.

The area including Batseri locality has already been identified as a high landslide susceptibility zone by GSI (2018-19).

The Baspa valley in recent years has witnessed a remarkable jump in increasing infrastructure development and tourist flux. In view of the inherent natural processes of seasonal Fluvioglacial weathering and erosion the area warrants a comprehensive strategy to minimize the associated hazard and risk.

The landslide areas expose highly tectonised contact between Kharo gneiss and intrusive (overlying) Raksham Granite of Vaitrita Gp(Glacial pate). The incidence has been identified as rock fall caused by rock slide from uphill escarpment(bottom of a cliff or a steep slope- it formed by wearing away of rock through wind or water).

The hill mass composed of granitoid rocks is naturally amenable to deep weathering and erosion with the release of large boulders, stated the report.

Reason of the landslide or rock fall

The Geo-scientific causes work out to be that rock slide occurred in tectonised and highly fractured contact of Kharo Gneiss and overlaying Raksham Granite subjected to seasonal Fluvioglacial and rain water related weathering and erosion. The failure mechanism appears to be planar or transitional failure from heavily jointed major escarpment composed of Raksham Granite. The type of movement involved downhill spread rock-fall (rolling of upper part or bouncing in downhill part due to steeper Slope).

The run out distance on the rock fall extends approximately a distance of 700 meter and maximum spread of 400 meter in the valley part.

Study also recommended for implementation of site specific remedial and protective measures. They also advised for Removal of precariously disposed rocks mass or boulder from the source or trajectory area, application of wire mesh, rock bolt etc in the vulnerable pat escarpment or source area.

Also, suitable afforestation, plantation, biotechnical stabilization of the slope material in particular in the trajectory area, has been advised.

Concrete or masonry retaining structure all along the road stretch cut in terrace or debris cone material with adequate drainage holes. Provision of rock fall shelter in a risky stretch of the road. Rock deflector to protect important infrastructure such as bridges etc. have been advised in the report of the geologists.

During the rainy season, the traffic movement is under strict onsite and offsite slope monitoring. Instillation of sign boards or banners at appropriately identified vulnerable locations for cautioning to the commuters.

Widespread advance communication or warning to the dwellers or visitors regarding heavy rainfall etc and awareness programs in landslide vulnerable areas.

The development of infrastructure, any slope modification etc must take into consideration after the geo-scientific evaluation of inherent risk or hazard in that locality or spot. Mesoscale(1:10000) landscape susceptibility mapping along Sangla valley ( Karcham-Sangla-Chitkul Sector )may also be carried out.