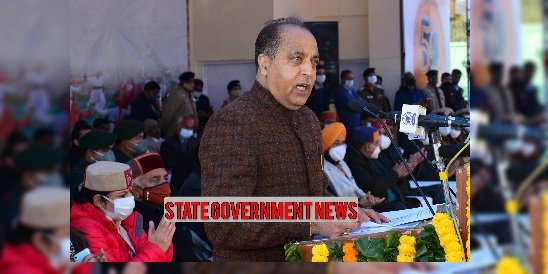 Presiding over 51st Statehood day at historic Thodo ground here on Tuesday, Chief Minister said that this fulfills a long standing demand of the employees, playing pivotal role in implementing different developmental schemes and public welfare programmes of  the ruling government. He said that after the hike in dearness allowance, the employees of the state would get the allowance at par with the Union government employees.

Thakur  also announced to provide free power to three lakh domestic consumers who are using less than 60 units of power per month. Besides,  he also announced slashing of the power tariff for Six lakh consumers from Rs 1.25 to one rupees who are consuming upto 125 units per month.

Chief minister also announced to reduce  power tariff  from 90 paisa per unit to  60 paisa to Fifty thousands agriculture consumers, providing relief to the farming community of the state.

Earlier, the Chief minister took the salute of the impressive march past of jawans of police, homeguards and NCC.  Meanwhile, Prime Minister Narendra Modi  has also  extended greetings to the people of Himachal Pradesh on the occasion of the 51 th statehood day.

Dhwala calms down! Expresses regret for venting out anger against Organisational...