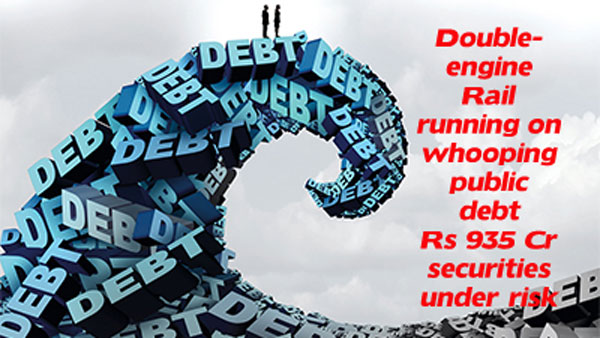 The State Government which is claimed to be a double engine rail might freeze soon under the whopping loan burden as official figures of 2021-22 projected the cumulative debt of 60500 Crore in the budget book. Not only debt but also most of the state companies are already bleeding and some of them are in the red zone with about Rs 935.50 Cr worth of amount already at risk here.

As per data, the State government has taken borrowings of around Rs 7000 to 8000 Crore in this financial year as it has now floated a bond on Nov 18 to take a loan worth Rs 2000 Crore.

Chief Minister Jai Ram who holds the portfolio of Finance while presenting his fourth regular budget this year projected the total debt of Rs 60544 Cr. He had alleged that the previous Congress Govt took loans of Rs 18000Cr or more during their tenure and while this government took over, the debt burden was already at 47906 crores.

However, the Jai Ram Thakur government which is about to complete four years in office may have taken cumulative loans over Rs 23000 Cr which has increased the state debt by around 50 per cent compared to the cumulative debt of Rs 47906 Cr by previous governments. The State Government  has projected a cumulative borrowing tune to Rs 13500 Crore till 2021-22.

Also now, the state needs to return the risk securities loans worth Rs 562.05 Cr of State Electricity Board, 190.60 Cr of Cooperation Department and Rs 146.15 Cr of HRTC. The same is already listed under column ‘amount in risk’ in the budget book.

Many financial experts believe that the logic behind the fresh Rs 2000 Crore loan is that the state government is likely to announce a Rs 750 Cr bonanza of 5th pay commission recommendation to around 207009 employees. The same is expected to incur an annual committed liability to the tune of Rs 12704.14 Cr to the state this year. These economic experts inform that the State Government cannot take a loan for sake of committed liabilities and non-developmental works, ‘however, it is allowed loans for developmental activities and state projects. The state revenue receipts are likely to increase to 9282.22 Cr in form of taxes and levies and Rs 2753.65 Cr as non-tax revenue. Another sign of relief is that the state cumulative expenditure on the subsidy would be Rs 1082.12 Cr compared to Rs 1250.51 Cr last year.

The state’s total committed liabilities are likely to be increased to Rs 41150.40 Cr in the subsequent year and very high chance that it may derail the double engine Government, which needs to quickly set the finances right.

The State Government has already admitted that finances are under stress owing to the adverse impact of Covid- 19, during the financial year 2020-21. The memorandum of FBRM laid out that the state economy has shown revival but the lingering impact Covid-19 could not be negated in short terms. The State’s tax base is very small and a central grant would be very important.

Sec 7 of Fiscal Responsibility and Budget Management  Act 2005 had earlier allowed the State Government to take loans up to 3.50 per cent of the GDP. However, during the Covid pandemic, Center allowed to exceed the limit up to 5 per cent.