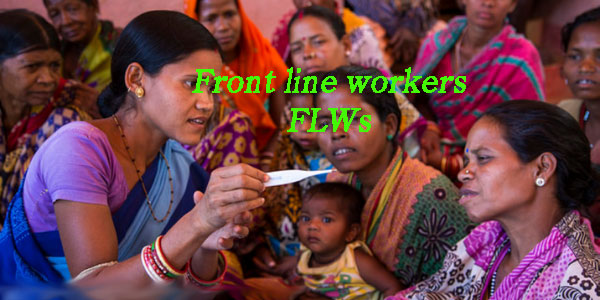 During the COVID-19 pandemic, key nutrition and health Frontline Workers (Anganwadi Workers, ASHAs, and Auxiliary Nurse Midwives) found themselves with new roles and responsibilities in addition to their regular tasks. This meant that they required new means to perform – primarily training on COVID-19 related activities, and resources from the government. A Study on the Frontline Workers (FLWs) in Himachal Pradesh and Rajasthan reveals that they are forced to work overtime without enough incentives, motivation and safety equipment during the Covid pandemic.

State Associate, Centre for Policy research, (autonomous civil society) Vinod Verma said that a paper was published by Accountability Initiative to study the experiences of FLWs during the COVID-19 Pandemic. Study was conducted from November 2020-January 2021, seeking queries from the experiences of the FLWs in two districts each in both the states. Sample size of 351-FLWs belonged to Solan and Kangra districts of Himachal and Jaipur and Udaipur of Rajasthan.

Key findings revealed that FLWs have worked up to three hours overtime during a day traveling in the far-flung rural areas without enough transport facilities, lack of PPE kits, and other safety equipment. Also it was noted that these health workers are not being given equitable incentives and have to work in an un-hospitable environment. Many of them had to face violence, abuse and threatening. Survey revealed a slowdown in health and nutrition-related public services in both states beside that role and responsibilities of FLWs saw an increase. As many as 83 per cent respondents reported working an additional 3 hours daily. Reasons that they were performing COVID-19 pandemic duties and regular job tasks. Over 50 per cent FLWs reported that their responsibilities had increased, which on average meant an additional two to three hours of work per day.

90 per cent of FLWs surveyed reported an increase in the number of people in their work area, which was largely due to the return of migrant workers and their families.

A majority of FLWs (70 per cent) faced community challenges. The major challenges were: A lack of compliance (80 per cent); Lack of trust (57 per cent); Beneficiaries not wanting Aganwardi centre (AWC)-related contact (32 per cent). Instances of community backlash came forth in qualitative discussions, stemming from a fear in community members that they will contract COVID-19 from FLWs, frustration around multiple household surveys and testing, and migrant returnees resisting testing and quarantine. FLWs experienced verbal and physical abuse. In addition, needing to travel long distances for COVID-19 surveys, returning home late in the evening, and the urgency of COVID-19 tasks taking place in the evenings, raised safety concerns.

“Implicit in this discussion was the fear of gender-based violence, with anecdotes about men ‘misbehaving’ or ‘looking at them unpleasantly’”, stated the survey. The major challenges faced by FLW households were: not being able to visit family and friends (35 per cent), long distance travel restrictions (34 per cent), and unemployment or loss of income during the lockdown (28 per cent).

The burden of additional household duties that fell on women was felt equally in both states (reported by 30 percent of FLWs). FLWs feared that they or their families could fall sick. Further, 28 per cent FLWs reported that their families wished to maintain a distance from them.

Among those that encountered challenges, 80 per cent reported facing pressure for work from their supervisors, and 43 per cent of FLWs reported that they were not getting the help that they needed in carrying out their tasks.

Ensuring FLWs have resources when they require it the most: FLWs did not always have access to resources such as PPE, mobile phones, and transportation, and often had to supplement these provisions at their own expense.

Around 70 per cent of FLWs said that beneficiaries reached out to them for COVID-19-related issues such as the provision of PPE or for health advice. However, 37 per cent (across all FLWs) reported that they were not able to assist citizens with COVID-19-related issues, largely due to a shortage of resources, followed by lack of money.

Even as 15 percent of FLWs felt that the training they received on new online software was inadequate, there is an opportunity to explore the use of technology to enhance communication and other aspects of service delivery in the future. FLWs felt adequate training on COVID-19 was provided. As many as 99 per cent were trained or received information on at least one COVID-19-related activity. FLWs felt that they had been adequately trained or provided information on COVID-19-related activities. However, gaps in training for certain activities such as coordination with other FLWs and departments, managing stigma and discrimination around the disease, and COVID-19 sample collection remained. Not only did a smaller proportion of FLWs across both states reported being trained on these activities, but even the ones who were trained reported them to be inadequate.

96 per cent of ASHAs reported having received monetary incentives for COVID-19-related tasks in Himachal Pradesh, compared to 74 per cent in Rajasthan.

Cross-state difference could also be observed in the mean payment amounts. The amount in Himachal Pradesh (around ₹6,900) is over two times that in Rajasthan (around ₹3,300).

During qualitative interviews, it emerged that an important aspect affecting motivation was the receipt of remuneration, and this factor was particularly significant for single women or FLWs whose husbands were unemployed. No such incentives were announced for AWWs or ANMs in either of the two states.

Less than two-third (58 per cent) of FLWs reported being recognized for their contribution. The most common form of public recognition or motivation was praise by supervisors, followed by provision of certificates, praise by beneficiaries and Panchayat members.

After qualitative interviews it was found that support received from supervisors was a key motivating factor. FLWs felt that the support they received could be improved: having more time to do the given work was reported by 76 per cent of respondents in Himachal Pradesh.

Also, meeting the supervisor in person (45 per cent), and having more frequent meetings (43 per cent) were other ways to improve support as per FLWs.

Only 11 per cent of FLWs reported facing challenges with supervision and support. This figure was higher in Himachal Pradesh (17 per cent) compared to Rajasthan (7 per cent).

A noteworthy aspect is that motivation or recognition from relevant government officials and politicians was quite low.

Insights from qualitative interviews revealed intrinsic motivators for some FLWs These were feeling a sense of duty to help their communities during the pandemic; a sense of pride in having the knowledge to help community members; a sense of patriotic pride and a desire to serve the community.

Recommendations by the study

Increase in payment for work done and timely payments: Providing a mixture of task-based incentives and a base salary could help in providing more financial stability to FLWs.

Salaries or honoraria and COVID- 19 payments continue to be motivators, and addressing late payment issues could thus influence motivation levels.

Reviewing employee circumstances: Among our findings has been trust on FLWs as a facilitator of their work. Assigning FLWs to areas where they have local community ties so that trust can be increased.

Moreover, given the long distance they are required to travel and safety issues they are often concerned with, reassigning villages that are easier for them to travel to or adjusting reporting times based on their travel, housework times would help with motivation levels.

Augmenting communications with supervisors: Simple measures such as meeting their supervisors more often, or meeting them in person can help in overcoming issues and maintaining FLW motivation.

Price index up by 0.3 point