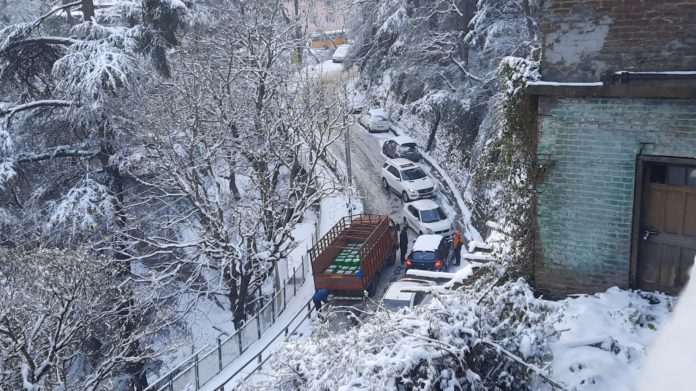 Shimla, Feb 6
Normal life is out of gear after three days of snowfall in the state as people are forced to brave the extreme cold wave without power and water when temperatures have also plunged by two to three degrees below the normal.
The district administration(s) of Shimla, Mandi, Kullu, Kinnuar , Sirmaur and Lahaul Spiti even after additional efforts are unable to open most of roads. Till Friday night around 250 roads, 500 power lines were down and 35 water supply schemes could not operated due to lack of power supply, official sources confirmed.
Superintendent of Police Shimla Mohit Chawla said that vehicular traffic could not be restored beyond Dhalli-Kufri upto Narkanda as road was extremely slippery despite clearing of snow yesterday.  ” After spreading of sand on the road traffic is through for smooth plying from Kingal to Dhalli on NH-5” SP said. People were avoiding to travel on the highway and public transport could not be restored.
Many outskirts of this capital town were without power for last three days as state electricity board stated yesterday that more than 500 power transmission lines are down which could not be restored. Many outskirts areas including Shoghi, Totu, Majhyat, Jubbarhatti, Ghanati, Chailey Khurdh, Pathanghati, outskirts of Kasumpti and New Shimla were without power.
People are forced to shiver in bone biting cold wave while living in the darkness for last three days, like in primitive times. Mobile phones and other communications facilities are in the state of blackout as the power could not be restored.
Minimum temperature of Keylong in Lahaul Spiti was minus 13.7 degrees and dip by 6.5 degrees of yesterday. Kalpa in Kinnuar minus 6.8 degrees , Narkanda in Shimla minus 4.5 degrees, Manali minus 2.4 degrees, Kufri minus 0.7 degrees, Seobhag in Kullu minus 0.5 degrees, Solan zero degrees Bhuntar 0.5 degrees and this capital town, Dalhousie and
Mandi one degrees each. Sundernagar in Mandi 1.2 degrees , Kangra 1.9 degrees , Dharmshala 2.4 degrees, Palampur 2.5 degrees, Chamba three degrees, Jubbarhatti in Shimla 3.6 degrees, Una 3.7 degrees Hamipur 3.8 degrees, Bilaspur four degrees
and Nahan in Sirmaur eight degrees, respectively.