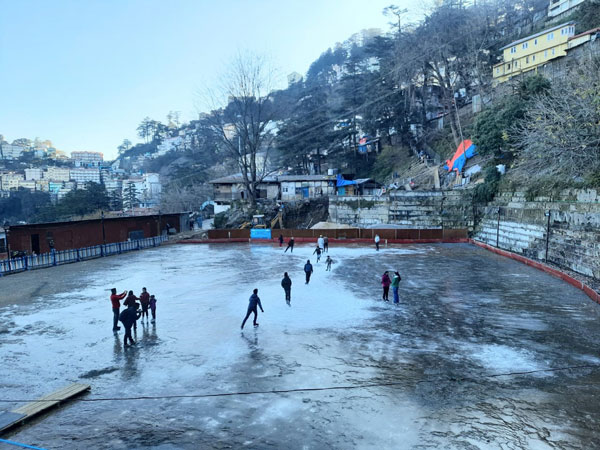 The heritage Simla Ice Skating Club has sought the intervention of the Shimla Municipal Corporation Commissioner for the removal of hazardous establishments from their premises. Club Organizing Secretary of Simla Ice Skating Rink Manpreet Singh in a letter sent to the commissioner of MC brought this matter to light.

Singh said that the historical “Simla Ice Skating Club ” is being ruined with every passing day and one-third of the rink has been taken by the Smart City contractor for lift related construction.

Further in the letter, Singh added that retaining walls were constructed with an allocation of forty-five lac rupees from the department of Sports, which has been badly damaged during construction activity and needs urgent conservation for smooth skating sessions.

He said that HRTC which runs operations at Lakar Bazar bus stand has allotted three new dhabas within the Ice skating rink premises to vendors who are openly flouting every norm laid by the government. Secretary said that dhabas do not have any water or sewerage connection and thus are contaminating the ice skating rink premises. Moreover, vendors are displaying their wares in the middle of the approach road, he added.

Currently, Ice skating season is in session and contamination of the premises is causing health and a social hazard for young children stated Singh. Adding that, vendors and local people are also routinely burning garbage and damaging the sanctity of the rink.

These Ice skating club members urged the SMC to look into the matter and remove these illegal establishments immediately.

Talking about it, SMC Commissioner Ashish Kohli said that they are taking appropriate action in the matter and would deploy a health and Civic body team to restore the sanctity of the club soon. He said that matter shall be resolved under his supervision on the complainant received from SISC, promptly.

Pertinent to mention that the city authorities have conceptualized a project of connecting the lakkar Bazaar bus stand side with the heritage Ridge of Shimla by building lifts/ escalators here. The project is being undertaken under the Smart city development plan for the city and is part of the aspiration projects undertaken by the current State government, for a complete Shimla makeover by 2022.

Till the end of the previous century, Simla Ice rink was the only natural Ice skating arena in the entire South-East Asia. Currently, Natural Ice Skating Rinks are at Gulmarg in Jammu & Kashmir, Leh and Kaza in Lahaul-Spiti district but Shimla rinks still hold importance for being the first one in the country.