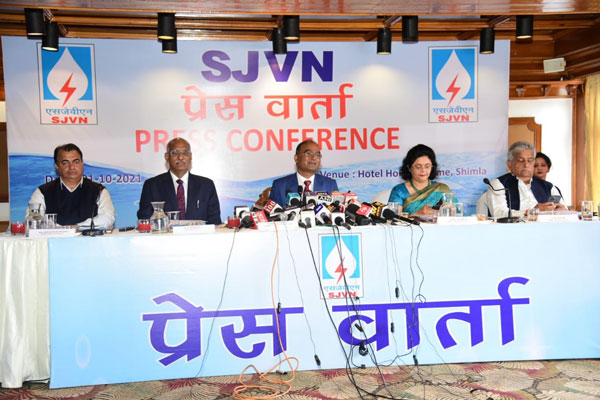 Shimla, Oct 1
Himachal Pradesh will have a fair share of Rs.23000 crore of investment in various upcoming projects in the state. This was stated by the CMD of SJVN Nand Lal Sharma in a media conference today. He added that along with 257 km long Transmission lines for power evacuation have also been conceptualized. SJVN has planned an investment of Rs 75000 crore during the current decade on its upcoming power projects.
He informed that SJVN has achieved outstanding operational performance by generating 9224 million units of electricity from its 5 operational power stations in the country. The design energy of these power stations, he said is 8700 million units and the generation has far surpassed the targets.
SJVN already has a portfolio of more than 11000 MW of projects under various stages of implementation and investigation. The company has already commenced construction of projects of 3300 MW capacity at various locations. Sharma said that SJVN has accumulated cash reserves of Rs. 8032 crore to fund its project portfolio of over 11000 MW internally. During the first quarter of FY 22 alone the company has added new power projects of 2525 MW capacity to its portfolio, he said. The Company has a net worth of Rs.13100.97 crore at the end of June 2021 which has increased from Rs.12332 crore.
Speaking about the financial performance, Sharma said that SJVN had clocked its highest ever Profit Before Tax (PBT) of Rs 2168.67 crore in FY 2020-21. The company’s Net Profit also increased to Rs 1633.04 crore in 2020-21 from Rs 1557.43 crore in 2019-20 and the Earnings Per Share (EPS) increased from Rs 3.96 per share in 2019-20 to Rs 4.16 per share in 2020-21. SJVN has declared a dividend of Rs 2.20 per share for 2020-21 of which an interim dividend of Rs 1.80 has already been paid in February 2021. In the first quarter of FY 2021-22 SJVN’s Standalone Profit Before Tax was Rs 445.07 Crore registering an increase of 15.86% over the corresponding quarter of the previous year. The Standalone Net Profit increased by 12.77% to Rs 339.54 Crore from Rs 301.08 Crore over the June quarter of 2020-21.
While speaking about prospects of the PSU, Sharma informed that SJVN has been allotted 679 MW Lower Arun hydroelectric project in Bhojpur district of Nepal by the Government of Nepal; the 104 MW Tandi Project, 130 MW Rashil Project and the 267 MW Sach Khas hydroelectric project on Chenab Basis, by the Himachal Pradesh government. On 24th September 21, SJVN bagged 1000 MW of Grid-connected Solar PV Power Project floated by the Indian Renewable Energy Development Agency
Answering a query about public resistance being faced at the Jangi Thopan Power project in the Kinnaur district of Himachal Pradesh, Sharma said that the Company will not go against the wishes of locals and said that the technology deployed should not be detrimental to the Ecology.
He said that in line with the Vision of the Central Government, SJVN intends to have a portfolio of making 30 percent energy from renewable sources like solar and wind by 2023. ” The same will be increased to 50 percent by 2030 and 60 percent by the year 2040,” concluded Sharma.

HP bye polls : Tashigang in Lahaul Spiti to be the...