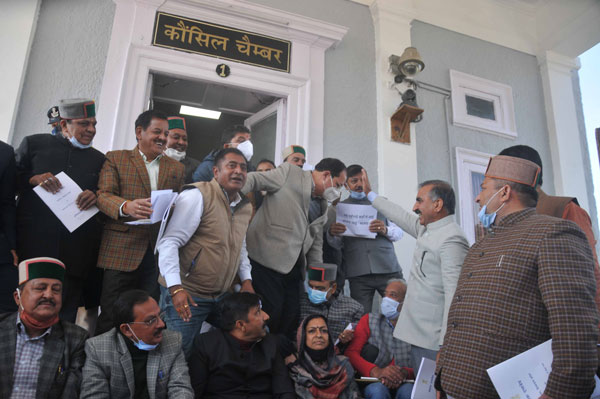 Five Congress MLAs suspended from the Himachal Pradesh Assembly for the entire Budget session sat on a dharna outside the House on Monday. They were protesting their suspension and the registration of an FIR against them.The Leader of Opposition Mukesh Agnihotri and legislators Harsh Vardhan Chauhan, Satpal Raizada, Sunder Singh and Vinay Kumar were suspended from the Assembly on Friday for allegedly manhandling Governor Bandaru Dattatraya.Speaker Vipin Parmar had submitted a formal complaint to DGP Sanjay Kundu for registering the FIR.

Speaking to the media, Agnihotri alleged that Chief Minister Jai Ram Thakur was responsible for whatever happened on Friday. He claimed that it was the Congress MLAs who were manhandled, and added that the deputy speaker and the ministers responsible for the act should have been suspended and FIRs registered against them.

The alleged incident had taken place outside the Speaker’s office on Friday when the governor was leaving for the Raj Bhawan after he cut short his address in the House following a ruckus on the opening day of the Budget session on Friday last.

As the five suspended MLAs including congress legislative party leader sat in dharna, the rest of Congress members took part in the proceedings of the house without raising this issue. The inner sources of the party have said the Opposition is watching the trend in wake of the Friday’s incident. While the five MLAs sat on a dharna, proceedings of the second day of the Budget session commenced at 2 pm on Monday, with condolence resolutions for some former MLAs and the sitting Congress legislator from Kangra district’s Fatehpur, Sujan Singh Pathania, who died after a prolonged illness on February 13.