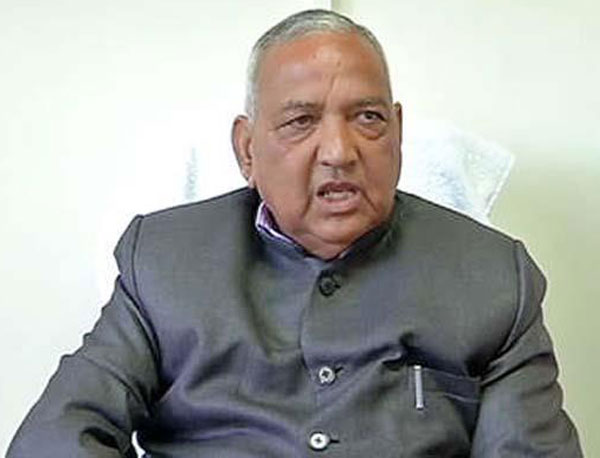 Shimla, Jun 13
The deep turmoil in the state unit of BJP, after open rebellion by a former party minister and senior BJP MLA Ramesh Dhwala, seemed to have been pacified for the moment.
After a meeting held with Chief minister at Oak over again on Friday party spokesman Karan Nanda released  a copy of a letter on Saturday claiming that Dhwala submitted it before the state unit expressing regret over venting out his anger against party Organisation secretary.
During interaction with  media after a meeting of Party MLAs from Kangra district at Oak over, Dhwala had charged Pawan Rana who is party Organisation Secretary for interference in developmental activities of the area and for promoting the non primary members in the party.
In a letter sent to party Dhwala said that on Jun 11 he had become emotional
and had expressed some concerns which were widely discussed in the media.
” Being the four time member of assembly from Jawalamukhi I am dedicated to the party
Organisation and behind the move to go in media the objective was not to damage the image of the Organisation and Government. ”  the letter mentioned.
Without referring or refuting volley of statements made against him by party leaders and a few party MLAs of Kangra district in support of Party Organization Secretary, yesterday he said that he would try to work hard to make the Organisation stronger in the future. MLA promised the chief minister that he would assist the party organisation to make it stronger.
Confirming his rift within party he had said that the issues was raised before the Chief minister who had assured of resolution after discussion in the party.
Reportedly after the statement made by Dhwala, he was called to Oak over by the Chief Minister and pacified to some extent. Political experts feel this statement is a outcome of the meeting held yesterday. Ruling party had already managed to won over the other members of assembly to disclaim the senior BJP leader’s statement in media denying the open rebellion in the MLAs meeting at Oak Over against Party Organisation Secretary.
For last one years Dhwala has raised the issue in public domain however party has failed to resolve it emphatically. Some political analyst feel that the party is trying to push Dhwala to the wall here. Pertinent to mention that Dhwala has been remained cabinet Minister in Prem Kumar Dhumal cabinet is one of the senior party leaders with an upright image.