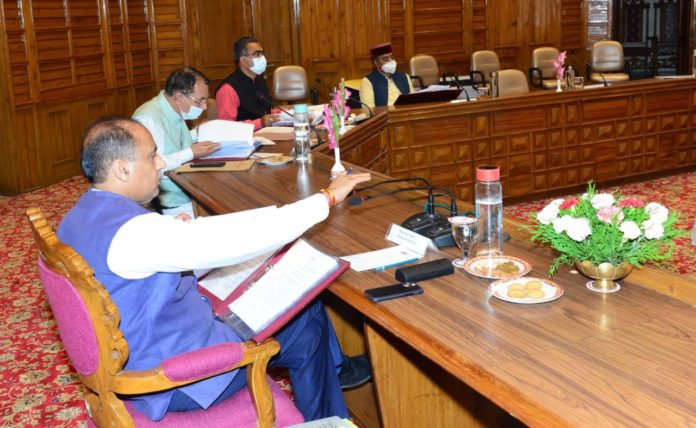 Shimla, July 7
Students of Under graduate courses in first year and second year shall be promoted to the next higher class. New and renewal admissions would start in colleges in the last week of July this year and new academic year for UG classes would commence from 16th August, 2021. This was decided in a State cabinet meeting held here today. The Cabinet also decided to recommend the Governor to convene the Monsoon Session of H.P. Vidhan Sabha from 2nd August to 13 August, 2021.
A spokesperson of the State government informed that in the meeting it was decided to increase the limit of gathering in all social/academic/ entertainment/cultural/political and other congregations including marriage celebrations and functions would be permitted with 50 percent with maximum of 200 persons in indoor built up/covered area whereas in open space gathering has been allowed with 50 percent capacity of the ground.
The CoM also decided that Covid appropriate behaviour would be ensured by the Deputy Commissioners and Superintendents of Police at prominent tourist places.
The Cabinet decided that  in  order to implement New Education Policy, question papers for class three, class five and class eight will be set by HP Board of School Education and their marking and results would be declared at cluster, block and district level respectively. The Cabinet granted six weeks exemption in school internship in respect of Diploma in Elementary Education for batch 2018-2020. It also decided that schools would remain closed for students till further orders and online study would continue as usual.
The Cabinet gave its consent to bring children who have lost their both parents due to covid-19 under the ambit of Mukhya Mantri Bal Uddhar Yojna to provide them additional monthly financial assistance of Rs. 1500 per month. Besides they also resolved to bring orphaned children and senior citizens above 70 years under the fold of HIMCARE Scheme without any premium. This would benefit about 1500 orphaned children besides 16304 senior citizens above the age of 70 years.
The CoM gave its consent to increase the additional honorarium being provided by the State Government from existing Rs. 2000 to Rs. 2750 per month to ASHA workers. This would benefit about 7964 ASHA workers working in the State.
The Cabinet appreciated the progress of vaccination status of teaching and non-teaching staff. It was informed that about 90 percent teaching and non-teaching staff have been vaccinated as on 30 June, 2021.  It was also informed that about 25000 college students were vaccinated on 28 and 29 June, 2021. It was also informed that about 80 percent college students of final year stood vaccinated on 30 June, 2021.
Infrastructure creation

The Cabinet decided to create one post of Medical Superintendent in 200 bedded Civil Hospital Nurpur in Kangra district for proper management of this hospital. It decided to set up MRI machine worth Rs. 12.50 crore in Dr. Rajendra Prasad Government Medical College Tanda in Kangra district to facilitate the people of the area.

It decided to convert Traffic Police Assistance Room, Kufri in district Shimla into permanent Police Chowki to facilitate the general public. The Cabinet gave its nod to construct additional four suites in HPPWD Rest House, Rajgarh in district Sirmaur to the facilitate the officials and general public.
Vacancies
The Cabinet gave its approval to create and fill up two post of Radiographers in Radiotherapy department of Dr. Rajendra Prasad Government Medical College Tanda.
It also gave its consent to fill up one post each of Assistant Professor, Medical Social Worker and Psychologist, two posts of medical officers and five posts of staff nurse in Palliative Care Services, one post of Assistant Professor in Medical Oncology services and one post of Assistant Professor in General Surgery in Shri Lal Bahadur Shastri Government Medical College and Hospital, Nerchowk in Mandi district.
The Cabinet gave its approval to upgrade Primary Health Centre Mari in Chamba district to Community Health Centre alongwith creation and filling up of five posts of different categories for its smooth functioning.
The Cabinet gave its approval to create and fill up one post of Professor of Obstetrics and Gynecology in Indira Gandhi Medical College Shimla.
It decided to create one post of Additional/Joint Director in Fisheries Department in headquarter Bilaspur to be filled amongst HAS officer.