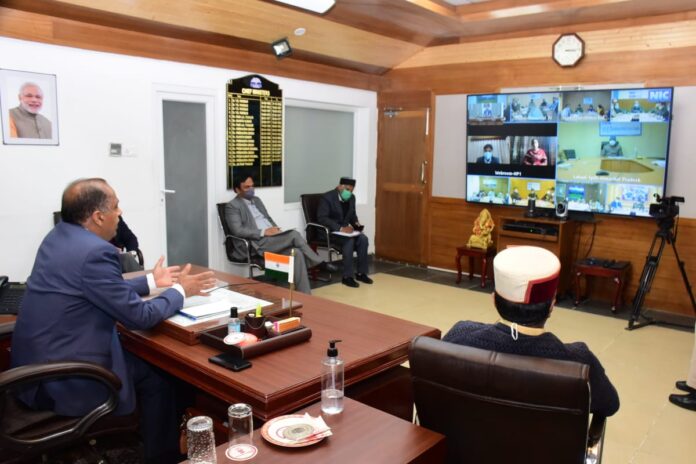 Himachal Pradesh Government today decided to change the number for gathering of people during various social occasions in outdoors from 200 people to 50 people. This was stated by Chief Minister Jai Ram Thakur, while presiding over a meeting through video conferencing with the Deputy Commissioners, Superintendents of Police, Chief Medical Officers, Principals and Medical Superintendents of various Government Medical Colleges here  today. Chief Minister also said that the State Government has decided to enforce five days office and sixth day work from home for all the Government employees of the State till 15th December, 2020 to break the chain of this virus.

He said that all the political functions would be held virtually and restriction on numbers would be implemented in letter and spirit in such functions. Jai Ram Thakur said that the casual approach of the people particularly in social gathering has resulted in sharp increase in the number of covid-19 patients. He expressed concern over the increase in number of Covid-19 cases as well as deaths of Covid-19 patients in the State and directed the officers to take effective steps to increase the bed capacity in their respective districts.

Chief Minister said that the State Government has also decided to increase the bed capacity in all district, zonal and civil hospitals to facilitate patients and to meet out any eventuality. Directing Deputy Commissioners to identify lands for setting up prefabricated Covid Centres, Thakur claimed that work on the same would completed at the earliest.

“Three prefabricated makeshift hospitals would come up in a matter of fortnight, two more hospitals are being converted exclusively into covid centres and the state health department has hired 250 additional nurses, lab technicians and other staff on an outsource basis, had informed the Health Secretary on Friday.

Chief Minister further stated that the Government of India has also sanctioned seven oxygen plants for the State.

Jai Ram Thakur said that to ensure proper and effective management of hospitals, the Government had also decided to designate a senior official as in-charge of Covid ward for better treatment of the patients.  He also directed the Deputy Commissioners to rope in private hospitals and laboratories for testing and treatment of Covid patients.

Chief Minister said that proper protocol must be adopted for treatment of the asymptotic patients under home isolation.  He said that such patients must be provided all required inputs for their proper medication. He said that adequate arrangements of pulse oxymeter must be made for these patients so that they could regularly monitor oxygen level in blood.

He said that it has been felt that the change in climate was also resulting in fast spread of this virus. He said that senior doctors must ensure at least three rounds of the wards of covid-19 patient to instill confidence in the patients.

He asked the officers to check this tendency and take remedial measures in this regard by enforcing the instructions of the Government issued from time to time.

3 Indian cities among least expensive cities within the world