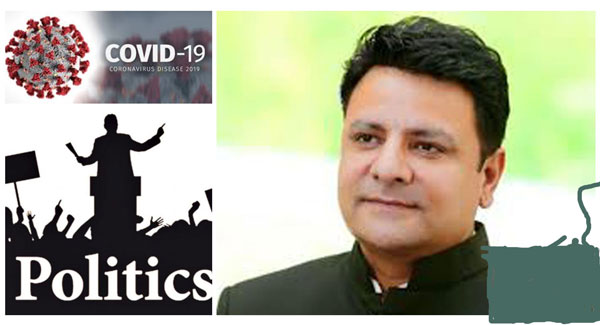 Shimla, Jun 17
All India Congress Committee warned the Central Government over increasing suicidal tendency among the people during the lockdown. In a press statement issued here today All India Congress Committee (AICC)  Secretary Sudhir Sharma who is also a former cabinet minister of Himachal said that the deadly virus Corona has taken toll in a big way on mental health across the Nation.
It is estimated that there has been more than 15,000 to 20,000 suicidal deaths due to COVID-19 till today which have gone un-noticed. More than four months into the Corona pandemic, the country is on the verge of another health crisis, with daily doses of death, isolation and fear generating widespread psychological trauma, he stated.

Many experts warn that a historic wave of mental-health problems is approaching like depression, substance abuse, post-traumatic stress disorder and suicide. Many medicinal data shows depression and anxiety already roiling around in the entire Nation.The Union and State governments in there fight against this deadly pandemic are not doing anything concrete towards this aftermath of COVID-19 mental healthcare. Now in major metros the Coronavirus is spreading  in the community  with over  3,54,000 cases and nearly 11,920 deaths in the country as of June 17th 2020. Interestingly  the  government continuing to insist that there  is no community spread is misleading and gives people the false hope that they are protected. This false trust is leading to more and more mental health cases.

It is fact that the corona-virus pandemic has brought with it stress and anxiety. According to a COVID-19 survey anxiety, depression, overeating and physical inactivity have emerged as top concerns among Indians during the crisis. Even people who have never dealt with anxiety or depression are suddenly experiencing those. Work from home is adding to the stress more women are impacted than men, he stated.

Just as country is struggling to arrest the spread of a global pandemic and reduce the mortality rate, a wave of completely preventable deaths has hit the Nation, added Sharma. According to on-line survey the user search behavior on internet reveals that the search for the term ‘suicide’ peaked right after lockdown was announced in India. It spiked again when it was extended for the third time.

Suicide is reportedly the second leading cause of non-coronavirus deaths in India during the lockdown, according to the survey. The researchers found that 168 of the 326 non-COVID-19 deaths till mid of May (51 percent) were suicides. These figures are nowhere

close to the actual impact of the crisis as these are simply a compilation of deaths reported in the media.

According World Health Organisation (WHO) close to 8,00 000 people die due to suicide every year, which means one person every 40 seconds. Suicide is a global phenomenon and occurs throughout the lifespan. Effective and evidence-based interventions can be implemented at population, sub-population and individual levels to prevent suicide and suicide attempts, he concluded.

After delay in cabinet induction, the Sukhu government affixed in portfolio allotment