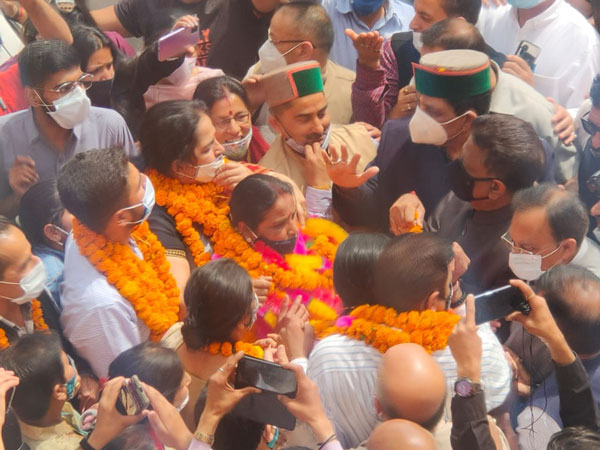 Brushing Aside the rumours concerning cross voting in Municipal Corporation (MC) key posts elections, the opposition congress  succeeded in capturing the posts of mayor and deputy mayor, here on Friday. The party leaders including Rajender Rana finally crowned    Poonam Grover and Rajiv Kauda after both won the election held in the Corporation premises.

Though, the ruling Bhartiya Janta Party (BJP) also contested the mayor and deputy mayor seats on hopes of cross voting but the congress leaders won the battle.  The BJP nominated Manish Kumar, an independent candidate from Ward No-1 Deonghat, as mayor candidate and Ward-9 councilor Shailendra Gupta contested for the post of deputy mayor.  The Congress has nine councilors and the similar numbers of votes were secured by congress candidates in the elections for both the posts.  While BJP candidates got eight votes.

Notably, in 17 member house, the congress candidates had won the elections in nine wards while BJP had secured only seven seats while one seat was won by independent candidate Manish Kumar.

Why polling got delayed?

Earlier, only 9 councilors of the Congress were administered the oath on April 13 after BJP councilors and an independent councillor had abstained in first meeting cum oath taking ceremony.   Due to non-fulfillment of quorum on that day the election of Mayor and Deputy Mayor could not be held.  After this, April 16 was fixed by the administration. On Friday, around 11.15 am, the Congress councilors along with the party leaders reached the Municipal Corporation meeting directly from Shimla.  While BJP councilors also reached to attend today’s meeting with their leaders around 12 noon.  During this time strict security arrangements were made on the corporation premises.  The media was not allowed inside.  First, the ADC Anurag Chandra Sharma administered the oath of office and secrecy to the BJP and independent councillors and thereafter elections were held for Mayor and Deputy Mayor.

The post of mayor was reserved for the Scheduled Castes candidates.  Poonam Grover, who was elected as a councilor from ward number eight from the Congress, was nominated and Rajiv Kumar Kauda, who was elected from ward-14, was fielded for the deputy mayor post.  Independent BJP councilor Manish Kumar was forced to field the mayor’s seat as the BJP did not have sufficient numbers.  Senior leader Shailendra Gupta’s name was proposed for the deputy mayor.  In voting, the Congress secured nine votes for both the posts while and BJP got eight votes.  After this, jubilant congress leaders and workers took out a victory procession from Municipal Corporation to the temple of Goddess Shoolini, the ruling deity of the town through The Mall road. EOM

COVID pandemic attributes for setting up 48PSA plants and 1014 ventilators