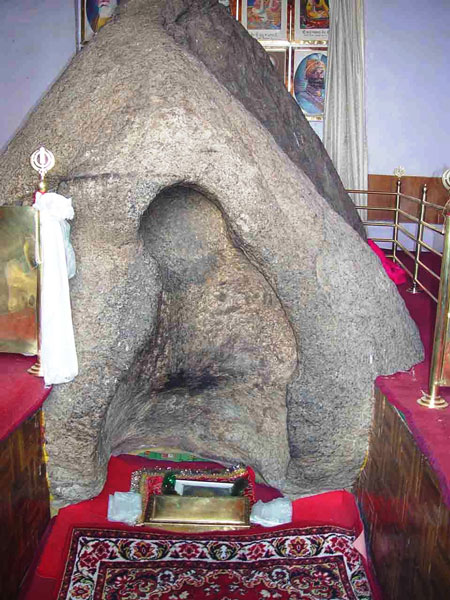 Traveling for about 25 kilometres on the Leh –Srinagar highway comes this beautiful monument of Gurudwara Pathar Pith Sahib which was made in the memory of Shri Guru Nanak, the founder of sikh religion. The foundation of this Gurudwara was laid down in the year 1517 in order to memorialize his visit to Ladakh. The Gurudwara is easily accessible via road, which otherwise is also in a good condition. There are a number of army camps along the route and is being maintained by the Indian Army these days.

The cloudburst of August 2010 could not smash it down, as the locals here believe that Shri Guru Nanak is still watching over the place and people living around the area. Although the region is predominately Buddhist but the people here refer to him as the ‘Lama Guru’ or ‘Nanak Lama’ who came here while on his trip to ‘Tibet’. The Spiritual Guru and His Highness ‘The Dalai Lama’ confirmed in one of his speeches
that the Tibetans look upon the Guru as ‘Guru Gampka Maharaj’ or ‘Guru Rinpoche’ a reincarnation of Guru Padmasambhava, who is believed to bring Buddhism to Tibet.

If one goes to the Golden Temple in Amritsar one may find many Tibetans coming here to pay their accolades to Shri Guru Nanak. As per the inhabitants of the surrounding areas people would often approach Shri Guru Nanak for help while he had taken a shelter there and which he did. Since then people here have never encountered anything awful. Another legend says that he was attacked by a demon at this place with a large boulder, however the boulder turned into molten wax and upon seeing this the demon realized that the man was no ordinary soul and he later summoned his whole life for the service of humanity.

The story was almost forgotten until this boulder was found again during the construction of Leh-Nimu road back in the year 1970. The authorities were in full swing to move the boulder and despite all the efforts it could not be moved. Hearing upon this some lamas came up and stopped the work and that is how the locals and the Indian Army later collaborated to built the Gurudwara.

The Gurudwara is truly a sanctuary of peace and calmness and is taken care of by the Indian Army now. It has become a tradition for every vehicle to stop there before continuing with the journey. Once one enters the main door, you are already in the grip of devotion and the pull of the raagas beckon the ears. The door of Gurudwara is open to all as tea and boondi Prasad is served to every single person who comes here. One can also stop here while returning from Sangam for langar, that is also open for all till evening!