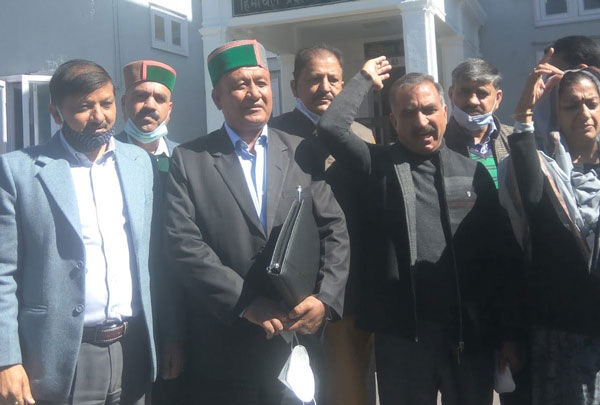 Shimla, Mar 3
Opposition Congress again staged a walkout seeking withdrawal of suspension of five Congress MLAs Including CLP leader in the house on the fourth day of Budget Session.
As the house assembled for the day’s session, Congress member Jagat Singh Negi raised issue of suspension of five party MLAs, including leader of opposition. He said that the Government  did not want to face them in the house,  therefore, sedition section 124 of IPC was invoked against Congress members without giving them sufficient opportunity to respond. He as alleged that BJP government is treating Congress members as if they are Pakistani or Chinese.
He further said the way the House was convened specially on Feb 26, despite the Assembly session having been adjourned in short notice of a few minutes, Congress members were deliberately kept out of the Assembly proceedings. He sought revoking suspension of five Congress MLAs and pointed out that they were not given the opportunity to respond to the false allegations being leveled against them.
As the speaker did not accept their demand the Congress members walked out of the House and joined the five suspended MLAs who were staging Dharna outside Assembly gate for the last three days.

Reacting to allegations levelled by Negi after questions hours Chief Minister Jai Ram Thakur said that sec 124 of IPC covered the protest of the Congress MLAs against the Governor Bandaru Datatrya and they should have sought apology immediately. The way  slogans were shouted and the way of Governor was blocked  is covered under the section.
He added that Negi was misleading the house by stating that section 124 didn’t cover their protest. The way Congress members acted against the Governor and stopped him to discharge his duty and misbehaved, the police action was justified. Marshall, who is an eyewitness of the incident in the Vidhan Sabha could register a complaint .
He further said that the incidents that have happened witnessed by many of us in the campus could not be denied.
Responding to the allegation made by Cong members of not informing about the special house of Feb 26 in time, Chief Minister said that taking alibi of convening the house in short notice they were trying to side tracking their action, as Congress members should have attended the house to respond to the allegations leveled on them.
He said, the House proceedings were going on for one hour and if Congress members were clear and keen to respond, they were free to attend the house and could have opposed the resolution passed against their members.