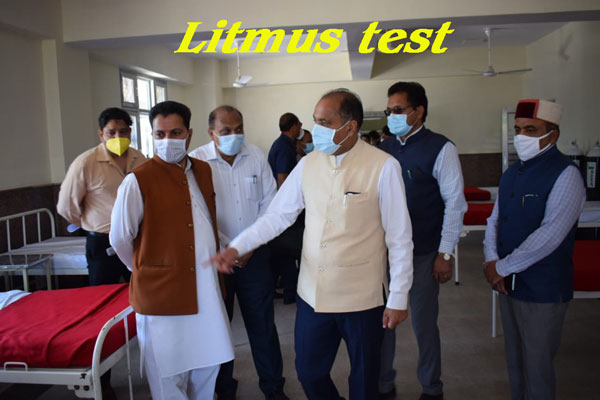 Provisions of 5000 bed capacity for COVID patients in the state, is a herculean task and a litmus test before the Jai Ram Thakur led State Government as hospitalization occupancy is already arriving to saturation in many districts.

As the COVID-19 per day infection positivity rate continues to hover between 18 to 33 percent, hospitals too have started to feel the heat of the same.

With number of active cases rising day by day, bed occupancy in some hospitals of the state, is becoming a cause of concern.

Though the government has added around 86 more beds in the last 3 days and it intends to add more, but don’t seem enough.

Chief Minister today in a media brief also stated that the government has decided to upgrade bed capacity for COVID patients to 5000. However, the timelines to achieve the target were not clarified by him.

As per the government report updated today, Hamirpur Ayurvedic hospital which has a bed capacity of 62 has already spilled over. Currently the bed occupancy rate is 120 percent as 72 patients are being treated. Similarly, Dharamshala Zonal hospital has reached 100 percent bed occupancy for COVID-19 patients and all 161 beds are occupied.

DDU Shimla, which has 115 beds, has 96.5 percent (111) bed occupancy rate currently. Main hospital of the state IGMC too has been reeling between 94 to 97 percent bed occupancy in the last 3 days. Currently it houses 139 patients against the bed capacity of 147.

In Bilaspur district CH has 79.3 percent bed occupancy rate. Here total beds are 29, and 23 are occupied. Another SLBSMC&H Ner Chownk houses 87 patients, with capacity of 118 (73.7 percent). Another hospital of the district in Ratti has reached 72 percent occupancy.

Although local administrations and state government are burning midnight burner but same if could not be managed in time, there could be a possibility of hospital in –patient spill over in coming days.

Almost six hospitals of the state including IGMC could witness the same. There are about 14000 active cases in the state and it is increasing by 1500 to 1600 daily.

33 students of HP being evacuated to Delhi & Mumbai :CM