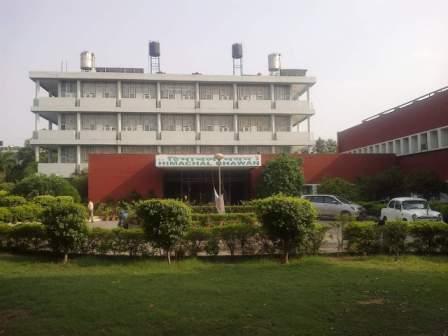 Reportedly Himachal Bhawan of Chandigarh is serving as resting abode for Chandigarh city traffic cops these days. Caught in the act during a surprise media operation many cops of Chandigarh traffic police were found sleeping/resting in the dormitory of the Himachal Bhawan during their duty hours. These cops were using dormitory beds without any official check-in or permission of the property management.

Sources state that this has been a regular practice of the cops, based on information the media made a surprise visit with cameras. The Himachal Bhawan at Chandigarh is the state guest house in the Union Territory. Besides it is also commercially run as HPTDC hotel/guest house. Based in sector 28, Madhya Marg it is one of the central location in the city. Here a commoner Himachali would get a room  at a commercial cost of Rs 1500 to Rs 5000/-, whereas on the other hand the Chandigarh traffic cops were found resting/sleeping here free of cost.

When asked these alleged cops denied that they were resting  and said that they had come here to have their lunch. The in charge of Himachal Bhawan however in a media statement  Chandigarh denied allotting dormitory to Chandigarh traffic police cops for resting/sleeping purpose. As per the Himachal Bhawan Chandigarh , this dormitory is used to host drivers/accompanist of the guests. Sometimes it is even hired by visitors.

Besides highlighting the other face of the Chandigarh police the incidence also has showcased the Mis-management being run by the Himachal Bhawan Chandigarh team. Under no possibility is it feasible that the Chandigarh traffic police cops could have entered the premises without the knowledge of the management.