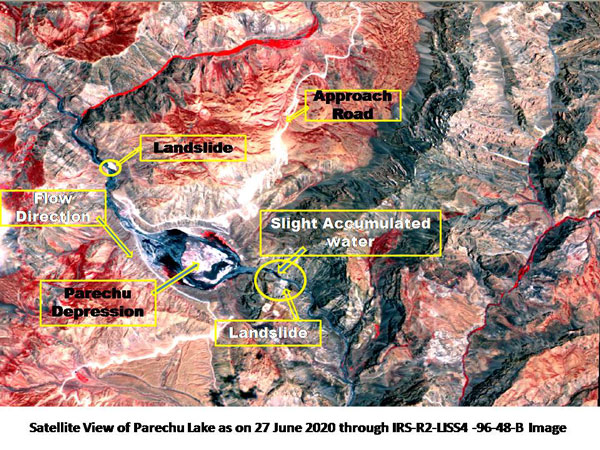 So far no threat is being evaluated from Parechu lake situated in Tibetian Himlayan region. In a press statement here Nishan Thakur, Joint Member secretary of HIMCOSTE informed that based on satellite data interpretation, there does not seem to be any threat from the Parechu lake as on day, but needs regular monitoring till its freezing. Parechu Lake was formed after landslides had blocked Parechu River in June 2004. Parechu River, which originated from Tibet, a tributary of Spiti River.

Thakur informed that HIMCOSTE has been regularly monitoring the said lake from April till October since its inception in 2004. Based on analysis dated June 27, the accumulated water in the lake depression seems to be flowing through the peripheral sides with some water on the upstream side. Two landslides could also be observed along the river course. One on upstream side of the depression on the left bank of the river, he added. Second on the downstream side of the depression on the right bank of the river. “Though the inflow and outflow seems to be normal,” stated Thakur. Adding that though the landslide on the left side  on the upstream also seems to be encroaching the river course, but no significant change in the river flow could be seen, he observed.

Though at present, the outflow from Parchu Lake is not alarming but in case the water gathers speed and volume, it can trigger flash floods in the downstream areas.The towns and villages likely to face flood threat in case of evtauality include Leo, Sumdo (in Lahul and Spiti), Khab, Dubling, Spillow, Powari,Tapri, Nathpa, Kaksthal, Choling (army establishments), Wangtu, Bhaba Nagar (in Kinnaur), Katalu,Jagatkhana, Chati, Bro, Nogli, Duttnagar, Nirsu, Nirath , Luhari and Bahna (in Shimla district).

Irrespective of use, NHAI to release  LA compensation within 28 days...