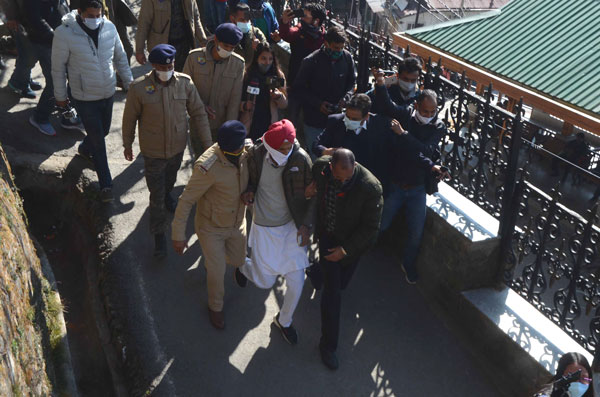 Shimla, Jan 19
Shimla Police detained a farmer union leader while a giving byte to media persons on the mall road on Tuesday leading to a high voltage drama as during the process, media persons were also disrupted from doing their duty.
On Tuesday when media personal were conducting an interview with a farmer union leader about the new farm laws on the Mall road, a police party not only quelled the media from the spot but also detained the farmer leader for alleged violation of sec 144 on the heritage mall road of Shimla. A police officer confirmed the spat stating that the issue has been resolved and it happened inadvertently as a media person was hit in the ‘milieu’.
CITU state committee and Congress party leader later rushed to the spot demanding immediate release of farmer leader condemning the police action.
They alleged that the BJP state and Centre Government(s) were anti farmers and want to crush the peaceful protests being made by farmers in the country against the three farm laws. In a press statement issued by the CITU leader Vajinder Merha said that it was undemocratic police use on a peaceful gathering of a media person and a man who was giving byte against the farmer law. Trade union demanded immediate release of the detained a man terming the police action autocratic. Mehra said that  police tried to disrupt the media persons while they were doing their duty by quelling them and using unprovoked action against them. The state government wants to weaken the farmers by resorting to such moves against them.
CITU leader questioned how sec 144 was violated when no slogans were shouted and
more than four people were not on the spot to give interviews to media persons. Mehra said that police is now cooking various stories to cover up its unprovoked action like Gudiya rape.
Number of people keep flouting the Sec 144 during various gatherings at the heritage Mall road of the city. “Then how could farmers and workers be banned for similar action if they have done it in a lawful and peaceful manner,” questioned the social activist and leader.
Later, CITU also held a peaceful protest outside SP office on the alleged police action against  a member of Kissan union and media persons terming it murder of democracy. CITU demanded immediate action against the police officer and personal who insulted the media personal and farmer leader.
” The state government wants to use force against the uprising of farmers against the
farm laws despite Supreme court assertions that it could not intervene in any protest which
was being done lawfully by the farmers.” he alleged.
The farmers Unions belonging to left parties have given the call of mass protest on Jan 24 in district headquarters including Shimla, Hamirpur and Kullu against the three farms law, he added.