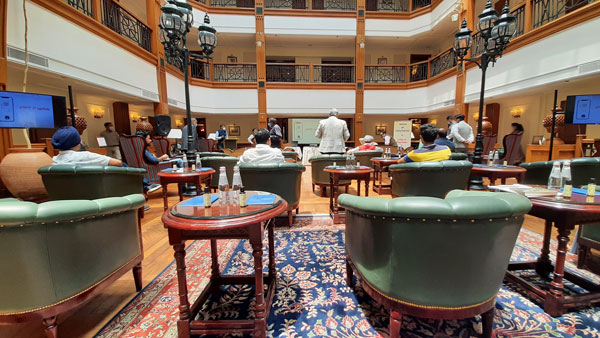 Even as the core question about the revival of tourism in the hill state remains unanswered the Tourism Industry stakeholders association and the Hotel and restaurants association of Shimla are organizing a two-day awareness and training workshop for hospitality professionals. “About 100 hotels are participating, stated Anil Walia, coordinator of the program. Adding, the objective of this program is to build trust with the government and tourists that Shimla is a safe destination to visit and stay, as and when allowed to visit for tourism purposes. “The purpose of this program is to help hoteliers of the state learn the finest practices and deliberate strategies for implanting high standards of safety measures, to build traveler’s interest,” he added.

Mohinder Seth of Tourism Industry stakeholders association stated that it is the first of its kind training program in the entire country, a proactive step to train the trainers. He said that in the training program most participants are either owners or top executives, who after being imparted training are expected to deliver the same to their teams further.

Deputy Commissioner Shimla in his address stated that the Shimla district economy primarily rests on three sectors. Hydropower tourism, Horticulture, and tourism. The 2 other sectors have started rolling back after our requisite efforts, but tourism still standstill, he informed. This sector has taken a big economic hit as no tourism happened in the peak season months of May-June, he added. The state government has allowed tourism units to open and citizens of the state can avail of these facilities, but the industry is still apprehensive, so most hotels haven’t opened yet. “The tourism units including their staff need confidence and training,” he added. Therefore keeping it in mind this workshop is being conducted and 4 more such will be done soon.

He said that one thing is established for the moment that currently there is no vaccine available for the cure of the virus. Thus everything will have to be planned accordingly. Adding for the purpose the state government has issued elaborate SOPs (from the booking of the hotel till checkout), which have been shared with the tourism sector stakeholders. But hands-on training is also required and thoughts also need to be exchanged, so that a sense of confidence is developed among the hoteliers, that they can operate as well as fight the virus simultaneously, informed the Deputy Commissioner.

On the occasion, even the products required for sanitization/precaution of visitors/staff/rooms,  etc as per WHO protocol and SOPs of HP Government were put on display for review.

Finding answer to the core question- When will tourist arrive?

However that the tourist stakeholders have started bracing-up for tourism in the World of Corona Virus, the city administration is not sure when will outside state tourist be allowed.  Talking about the subject Kashyap stated that in lack of any vaccine introduced to cure COVID-19, the likelihood is that tourism in the state might not pick up soon. “As the visitors will be skeptical to visit for tourism purpose fearing infection,” he stated. While appreciating the program as the first step towards confidence-building measures, the DC assumed that the tourism industry might have to wait for another 2-3 months, before odds start bending in favor.

Some hoteliers stated that since the heat wave is picking-up in the plains, hotels are receiving a lot of queries from likely visitors. They said that the government should speculate allowing such visitors by issuing passes after ensuring all SOPS are practiced during the visit.

Herein Kashyap replied that as of current even the locals coming back are being asked to either home quarantine and if they have arrived from high loaded virus cities, then have to undergo compulsory institutional quarantine. So even a tourist shall have undergone the same procedure if allowed. Moreover, the tourist will also not be allowed to visit anywhere outside, thus deceiving the entire purpose of their visit. Further when the DC was asked that if testing could be done on the state border, before taking in a tourist, he stated that currently, most random testing machines are providing inconclusive results, which cannot be relied upon. Also, studies reflect that if a person is infected by the Virus, it very likely that they may not test positive for the first 72 hours at least. And this can create scope for the hotel owners/staff and others involved in the process to get compromised. Thus such ideas might have to hold for the moment, he confirmed.

“The training will usher confidence, for both i.e the staff of tourism units as well the tourist which plan to visit in near future,” elaborated Walia. He said this is a phase-wise exercise that the associations have started wherein the first step is training. Hereafter the feedback and experiences shall be shared with the state government, along with providing them feasible road-map to slowly kick-start tourism, he added. And the final phase shall be implementation, as and when the government allows tourists, he concluded.

HP guidelines for resuming hotels during pandemic- Read below